So, I had a bit of time spare in the weekend and a desire to do something other than stay curled up in my nicely air-conditioned (albeit tiny) hotel room watching reruns of McGyver and High Chapparel (I know, they were very tempting!). In my wanders to get food, I'd seen both the Singapore Art Museum 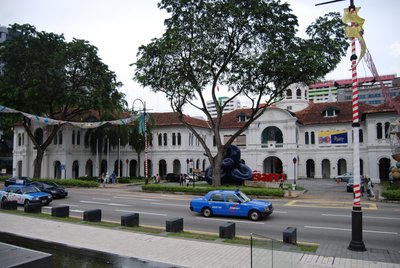 and the National Museum of Singapore, and they both appealed.

The Art Museum had three collections on the go: one (the first I saw) I hated. It was the Daimler Art Collection, which is a bunch of modernist paintings (it also included the Andy Warhol "Cars" group of works (about which the New York Times said when reviewing it in 1988 there was a lot of filler and that it was hard not to feel embarrassed for the Guggenheim in exhibiting it)). If I quote some of the description of one group of works, it might become clear why I hated it:

"the pictorial elements, detached from any narrative or illustrative context, should mean only themselves, and should be simple, precise and controllable..."

And then there was a mention of "Zero Art", which is supposed to be minimalist and defy interpretation; the

"viewer was supposed to observe and appreciate the minimal object for its own qualities without deriving any additional meaning from the work."

So there were a few photos I kind of liked, 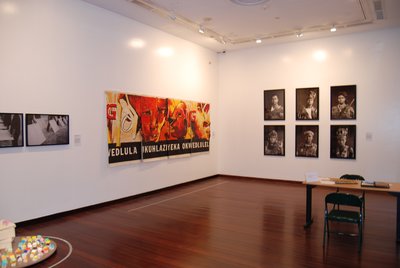 and a couple of Warhol's car pictures - the video on endless loop of a Mercedes driving up, three women getting out and unloading a whole bunch of shoes from the boot and then bundling one of the women in; not so much. Really, 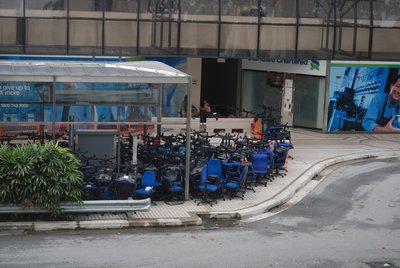 these chairs could have just as easily been an exhibit!

Then I went to the APAD exhibition, which was of contemporary and slightly older (back to the 1950's) art by Malays. No pictures, sadly; I was busted by a security guard as I was about to take a shot. He was very nice about it and proved to be a very amiable and helpful fellow. This exhibition I liked a lot; clearly representational, rather than zero, art, with lots of colour and images of local life and icons. One particularly cute and suggestive painting was called "Tea With Mr M" where someone was sitting down to drink tea with a single M&M (with a Nike swipe just in case we missed the point).

Going into the third (Korean Contemporary Art) I was blown away by a picture simply called "Pencil 3" (by Hong Kyoung Tock). For a start, it was huge, covering an entire wall. It was comprised simply of pencils and pens, millions of them, very bright but at points merging into one another and at others creating patterns. This is a smaller version:

He also did something called Library 3, with lots and lots of books piled up, again very bright and clean, but with some macabre touches: animal skulls lurking in amongs the books, headless mannequins and a kind of shrine covered in toys. All quite disturbing. Here's another from his library sequence: 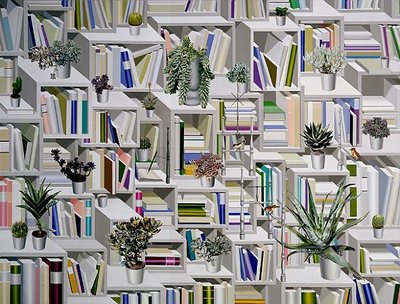 Then there was something done by Lee Lee Nam: he took a very classical image, such as a wee shack on an island in a river, digitalised it and then displayed it on a big screen TV. But then you'd notice subtle and very slow movements - waves rippling, a boatman punting by, a light going on. I was entranced. The third thing that got me were a few apparently simple images of people in ordinary life; when I got closer, I saw that they were blocks several centimetres deep, and the images of the people had actually been carved or moulded into the blocks: they effect was that as you walked past, you'd swear they were turning to look at you.

During my wander through, I was accosted twice by people wanting to survey me, both funny in their own way. The guy had a set of questions, but decided he could fil my answers in for me, that everything was good or very good. The woman was much more thorough, I think we talked for more than half an hour. About twenty minutes in, she realised her recorder was not, in fact recording: "no matter, I'll do a rough version iof what you've said". Some of her questions were odd, such as "If Singapore Art Museum was a person, what sort of person would they be? Would you talk to this person?" Answer: "An older person, male I think, a great respecter of tradition but open to new things, might even wear some bling and manage to look gracious with it."

SAM was about all I could cope with, so instead of hitting the Museum, I took a wander through Fort Canning Park, 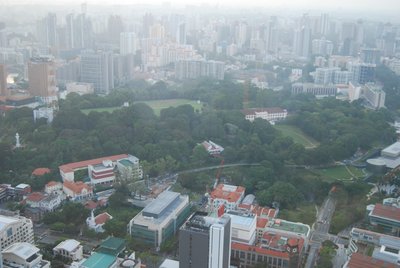 which unfortunately no longer has a fort, just its gate.