Cambridge MD is a town of about 10,000 people on the Eastern Shore of Chesapeake Bay, across from Baltimore. I get the feeling that it is not really on the travel plans of many people tripping about the world or USA. I doubt that I would have ventured that way at all if it was not where one of my all time favourite people lives. Before getting there, I had to get myself out to Baltimore airport to acquaint myself with a new friend 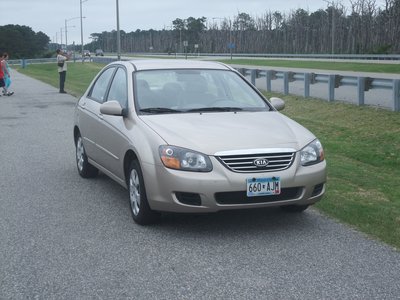 When the fellow at the car rental place saw what I was going to be doing, he was all "are you sure you're going to be comfortable, that's a really small car, you might want something bigger", yet it is a 2 litre, brand new four door sedan and there is only one of me. I'm sure we'll be fine.

Navigation was very easy - out past Annapolis, across the Bay Bridge (would have loved to stop and take a picture as it looked splendid, but they don't tend to like that on freeways at the best of times, and definitely not when its going across a bridge) and, coincidentally, through Chester which is where I helped my Turkish friend to yesterday. I actually stopped there because I was feeling peckish, and the picture of a big red apple convinced me I was outside a foodstore. Not so lucky - I could get paint, my clothes cleaned or electrical supplies, but not food. Didn't actually get any until I hit Cambridge.

Our plans were not really set in concrete, so it wasn't a surprise to find Katie was not home, so went for a wander along the main street of Cambridge and out towards its pier - some nice old colonial style houses made for a pleasant walk and I found a bar down on the waterfront which served up (very slowly) a beer and quesadilla (a word I had a little trouble pronouncing, particularly when I couldn't remember which way round it is constructed). It was only after I'd ordered it that I remembered I'd had one last year, somewhere in Idaho or Montana and thought it awful. Luckily, this one was much better.

When I did catch up with Katie and Brian, they took me on a tour of the town. I think the highlight had to be Chesapeake Classics: even the possibility of such a place had never occured to me. It is a largish shop given over almost entirely to decoys, primarily ducks but also some fish, mostly for collecters rather than those who actually hunt ducks. Out the back was a decoy museum. Stupendous! Since it was second Saturday, Cambridge was putting on a show: a band was playing, beer was sold in the street (but not from a truck), pulled pork was on offer. I wouldn't say its the biggest turnout I've ever seen, but it was a nice thing to do. Like a lot of American towns, Cambridge main street has been destabilised by all the new shops starting up out on the highways and so things to get their downtown districts appreciated are important.

Chesapeake is crab country, but I can still shudder at a childhood encounter with a crab on my dinner plate: in 8 year old boy terms, it was yucky. The idea of a softshell crab which is battered, cooked and eaten whole brings back the shudders. So I didn't have crab for dinner.

On Sunday, they brought out the big guns in terms of places that appeal to me: traditional American eating establishments. Cambridge seems lucky to be blessed with several of these places. I wasn't too keen on Katie's chipped beef on biscuit, mainly because it was smothered in a milky white gravy, but was very happy with my choice. It is places like Millies, and another we would have eaten at had they not shut as we drove up, and the bakery Katie's sister has that make me think I could happily be American.

There was an information centre nearby, so we had to go over. Funny thing was, they were promoting Cambridge by quoting John Barth, who was born there, but when I asked the lady running the place if I could get any John Barth books in town, she had no idea who I was talking about. No visit to the John Barth birthplace for me then. It did set me on a quest, however. I have most of his books back home, have only ever read Lost in the Funhouse, but really wanted to read his Floating Opera when I heard it was set in Cambridge and the Bay. Cambridge doesn't really do bookshops, it seems. Katie was busy with my camera, managed to get lots of sideways shots but in one I am facing the right way up 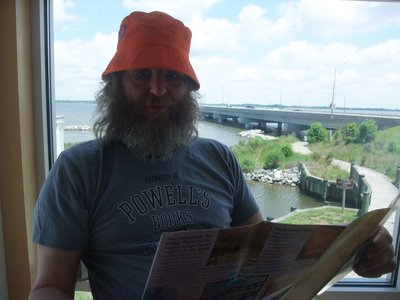 Like my Orioles hat? Its the colour that did it for me.

The rest of the day, we just went to the beach away over on the East coast, in Delaware, at Reheboth Beach. First stop - every bookstore in sight in the hunt for John Barth books. No joy. Then it was time to settle into some seriously good beer at the Dogfish Head brewery pub - some of his beers are a bit extreme and gimmicky for me, but he makes a fine IPA, so fine I bundled a 24 into the car. I liked Reheboth Beach a lot - Katie had said it was kind of white trash, but it wasn't noticeably so (or I'm too white trash myself to know). It seemed very friendly, lacking in the kind of louts and drunks and drunken louts you run into at a lot of English beaches. The beach itself run for miles. 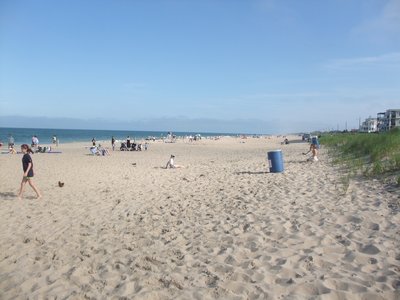 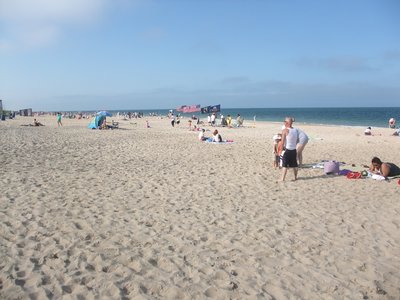 We were more interested in the ice cream, the popcorn, the salt water taffy, the t-shirts, the burgers, the rather nice gentlemen's clothing shop and, finally, the funfair. 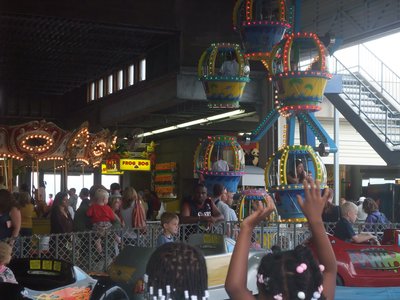 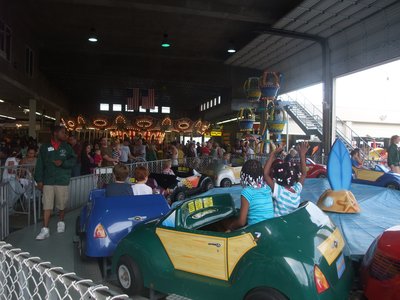 These cars got up to an incredible speed 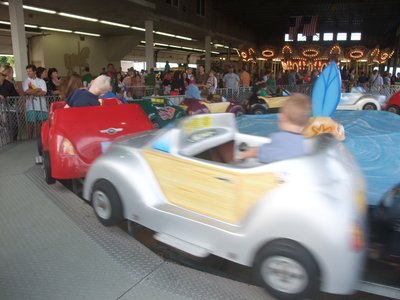 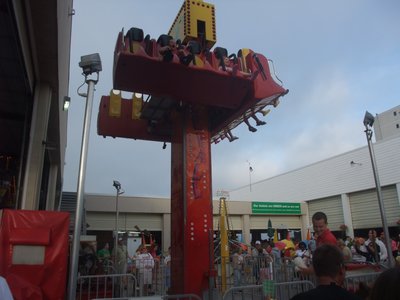 although I was amused when a more mature lady got on - all she could do was laugh their head off. Katie and Brian were intent on going on this alarming whirligig thing, that I just couldn't cope with so I amused myself by trying to get their photo every time they came around: missed every time, except when the machine was stopped 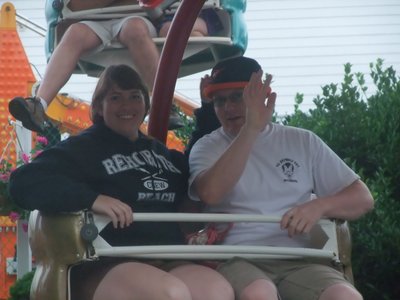 Somehow it was after 10:00 before we got back, so after a quick cook up of some franks on the barbie, it was sleep time: early start Monday for us all. After going to the bakery and having rather good coffee twice and a fantastic donut twist thing, it was time to drop Katie at work and head off on my adventure.

Posted by NZBarry 20:23 Archived in USA

Sorry about the crab aversion. One of our best friends here is Maryland and we're getting ready to place our crab order soon! Sorry, too, about the lack of John Barth in John Barth country.

Hat suits you, Sir! Said dear friend is a Rehoboth Beach, girl, too.

Looks like you are headed back to NZ when the bands are starting back up (Sam Hunt and David Kilgour will be on tour). Did you hear that Chris Knox has had a stroke?

Hope to catch you on your 2010 voyages. A few of us are trying to entice Misters Graeme Humphreys and Peter Keen (ex Able Tasmans) out to the States, too.