I left Williamsburg with no real plan but a fairly serious dilemma. Although the general trend of the travel is inevitably west, to get me home, a variety of paths are possible. I had a serious wish to see Charleston and Savannah, which meant heading south and along the coast, but an equally serious wish to see mountains and rivers, which meant heading south west. I spoke to people and they only made the dilemma worse. This was my last day I could keep travelling without commiting to one or the other: standing on a cross roads in the rain, my mind was made up. I'm going south west, but coming back next year, with more time and less heat.

I think most people going to North Carolina would check out its capital, Richmond, and as I drove out the old US5 from Williamsburg, 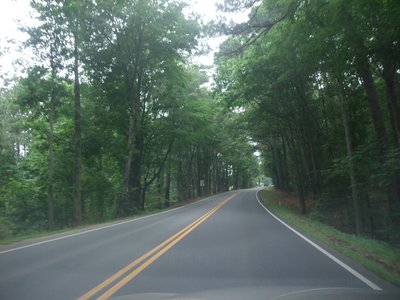 that was my plan as well. Whimsy took over: it amused me last year to visit Moscow, Idaho and now I had Petersburg, North Carolina just a few miles away.

In around 1650, this marked the western and southern boundary of English exploration. Its definitely a town that has seen better days, half of its main street was closed down, but I found it to be magical, far more engaging than Colonial Wiliamsburg. I spent a couple of hours wandering its streets, 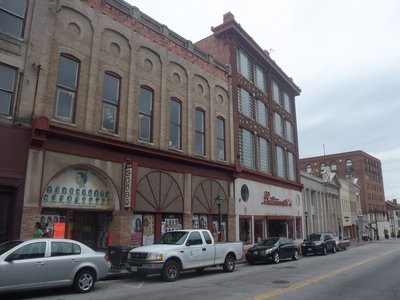 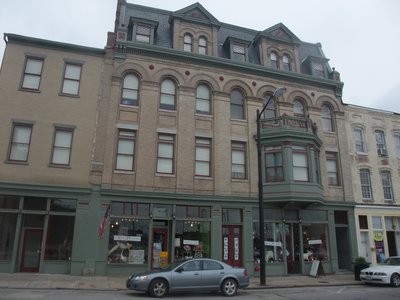 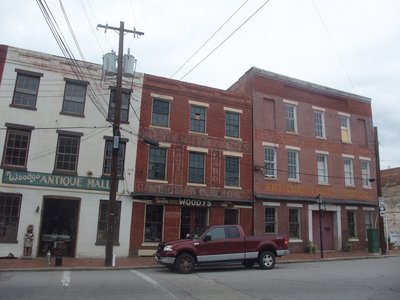 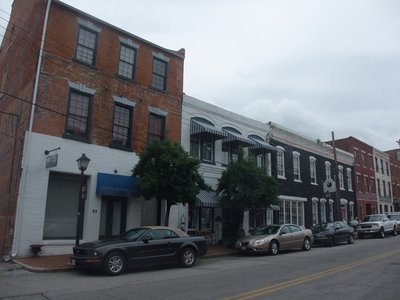 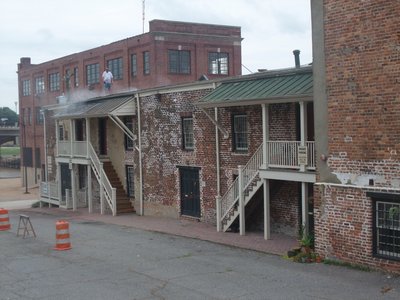 admiring people who were starting new and fairly obscure businesses, such as the shop selling Crabtree & Evelyne stuff in this building, 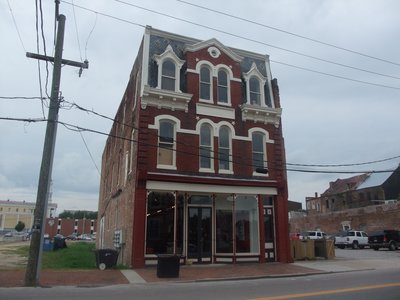 or having wonderful displays in their windows 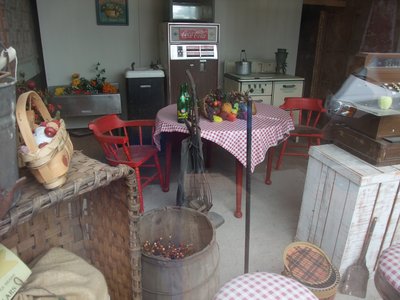 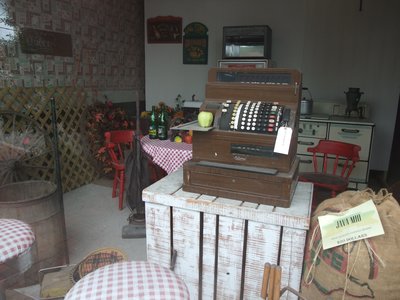 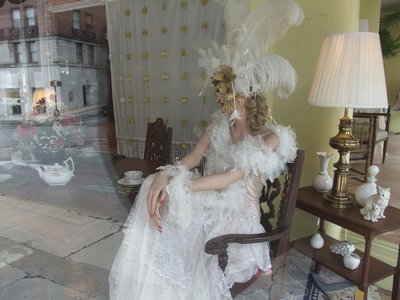 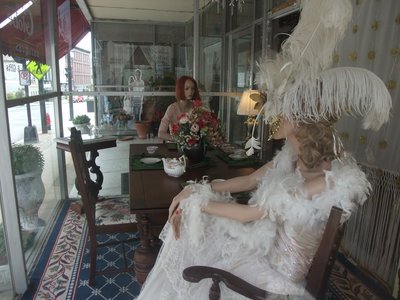 (these are dolls, not real women)
snapping pics of the courthouse, which loomed above erything 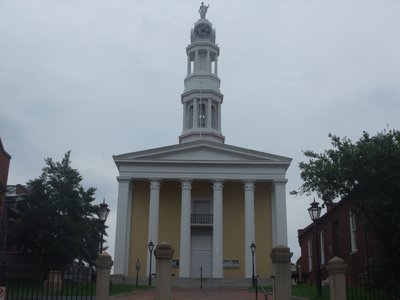 I was even able to find a good coffee in a cool cafe, Maria's, 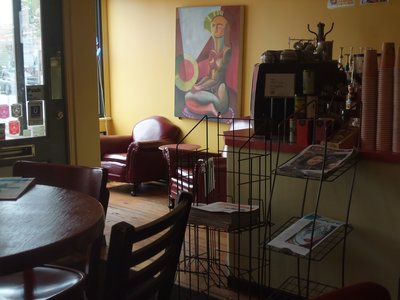 much better than that produced by the "leftie wierdoes" in Norfolk. I was stalled by these suits - they were equally charming 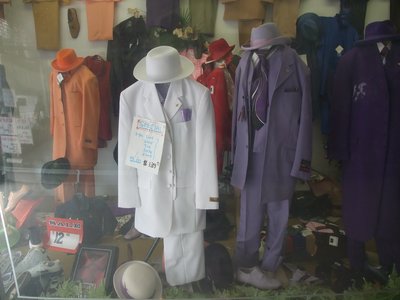 If it hadn't been so early in the day, I might have stayed. In fact, to hell with the earliness, if I'd seen a functioning hotel as I wandered, I'd have stayed.

Across the main road, things took a turn for the posh: all of these appeared to be private homes 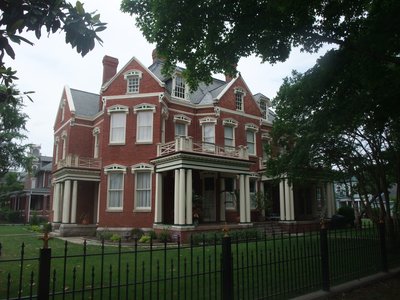 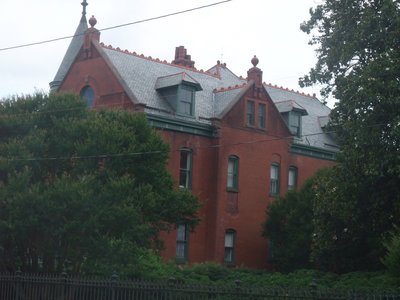 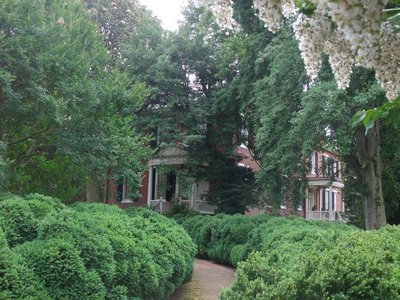 I know I could make things happen faster if I was to take the Interstate, but I don't like them very much - six lane monsters that are disconnected from their surroundings - for example, you have to exit to get into a town rather than have the road take you right through - and heavily populated by chain food and lodgings outfits.

So, instead of I-75, I took the old US-1 south from Petersburg. It is quite an experience on this stretch of the road, as it has been superseded by the nearby Interstate: most of the service stations 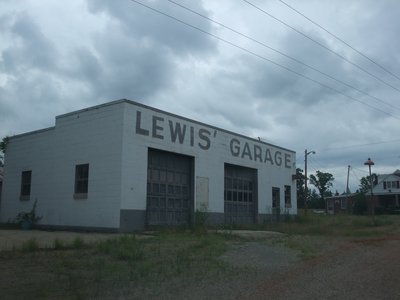 and shops sit derelict and unused.

I noticed a couple of old style motels that were pretty sad but possibly still in use, there was grass growing on the roadway and there was no traffic. This is a road which should be honoured: it is one of the first created for the automobile, running from Florida to New York. Originally, it was apparently just some ribbins or the like attached to telegraph poles to show motorists they were on the right track! I liked the Roanoke River as I passed by 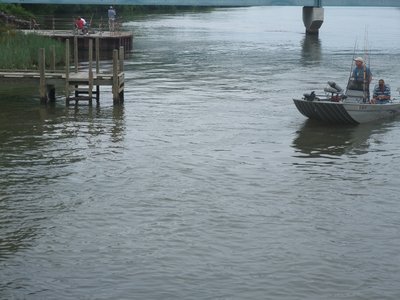 Favourite song on the radio today, in amongs all the R'n'B and R'n'R? A Country & Western number Here's a Dime, Go Call Someone Who Cares, by someone called Dewayne Bowman.

Chapel Hill is a University Town, part of the Reasearch Triangle (Durham and Raleigh are the other two points). The trusty NY Times sent out a brilliant list of things to do there, two days after I left. I was a bit tired and it was raining, so I found a Red Roof Inn, tangled with the Interstate a few times (I overshot the hotel twice), and went for the first decent looking place to eat, some sort of noodle fusion hell.

Posted by NZBarry 00:02 Archived in USA