Off to Japan - Narita to be Exact

Air New Zealand decided to do a bit of deep discounting of tickets for holidays over the Christmas period. After a bit if umming and aahing, tossing and turning, toing and froing, I decided that three weeks in Japan would do me nicely. I'd long been curious but the cost always frightened me, until I spent several months in Europe and the USA. It turns out that Japan can be very affordable.

When my work was done for the year in Dunedin, I didn't just hop on a plane and fly off to Japan, or even to Auckland. Oh no, I thought I'd get to Auckland by bus, testing my ability to get $1 fares on nakedbus. The South Island was easy - a $1 fare to Christchurch, two nights there and another $1 fare to Picton for the ferry. Luckily the Bluebridge people were kind to me, as I'd actually booked for the following day - they slipped me on anyway. Since I couldn't get a $1 fare out of Wellington, I hung about for a couple of nights. I also had to detour through Tauranga, so I caught the nakedbus to Taupo and regular Intercity out to Tauranga. It is a long way to go by bus, but I found the journey remarkably pleasant, and the buses all comfortable and in good condition (the nakedbus on the Wellington - Auckland route is as good as any). In fact, the worst bus was the Intercity, it was very noisy. I actually had a $1 ticket from Tauranga to Auckland for Boxing Day, but my mum didn't think it was worth missing the family Christmas in Auckland just to use the ticket, so I drove that bit. We had a bit of a trial run for the airport on Christmas Day as one of my brothers and his family was using the same Air NZ discount to take off to America (with a minor panic as they had no idea an Electronic Travel Authority is needed! Luckily, with a laptop on hand, this could be remedied immediately).

Come 27 December and it was my turn. The flight was just a flight, with nothing remarkable. I had decided that Tokyo was a bit much for my first time in Japan, and had heard that Narita town, two stops down the railway line, would be a quite nice place to stop. I was a bit worried as the hotel I had chosen to stay in had not replied to any emails. It had online booking but in Japanese only - I did try to use it and got pretty close, but what confounded me were the several buttons that were presented: I really had no clue which one would effect my booking, so gave up. I did find a Japanese travel website that would take a booking (and my money), but who knew whether that meant the hotel would have any knowledge of me?

As I entered Narita on the train, I spotted my hotel (the Richmond) so it was no problem finding it and yes, they had my booking and I had my first experience of Japanese hospitality: at least three perfectly groomed people on the front desk bowing profoundly every time I made an appearance. I think I racked up 93 bows in just one night! I also racked up a whole bunch of confusion - was I supposed to bow in return and, if so, would a single group bow do the trick or did everyone get one? I ended up just smiling vaguely at everyone I saw.

The hotel was really rather good - a spotless lobby and small but perfectly formed room, complete with slippers, torch and free internet (standard in every Japanese hotel I stayed in): 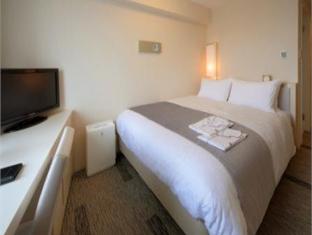 My first encounter with Narita was not encouraging - a tiny town square, fronted by the competing railway stations, grotty looking concrete towers - I could have been anywhere. I wandered about for a bit, had my first encounter with Japanese bakeries - they lay their baked goods out much like we lay out vegetables in a supermarket, and can be as big (most of the baked goods were unrecognisable, but there were various rolls and sweet buns I quickly came to enjoy) and realised I'd have two problems with eating in Japan. The first is that I am not a great fan of Japanese food, some of it looks just weird. The second is that I have no Japanese language and many Japanese eating houses have no English menu and little English spoken. Sure, they have these plastic mock ups of the food, but when they're a reconstruction of something I've never seen before, that doesn't help. I had thought it would be great to eat at an Izakaya, a pub where they serve lots of charcoal-cooked meat snacks, and I think I found a couple, but they seemed just a little intimidating. I walked past a place doing burgers and other fastfoods and decided that would do: fried rice is not exactly a great culinary start. The staff never spoke a word of English but were fantastically friendly.

I noticed a street running off in a direction I'd not been and struck gold - a street that made me think "I'm in Japan". I have no idea if some of the buildings were built last year or are centuries old (although the street itself has been here for centuries), but they were good enough for me. 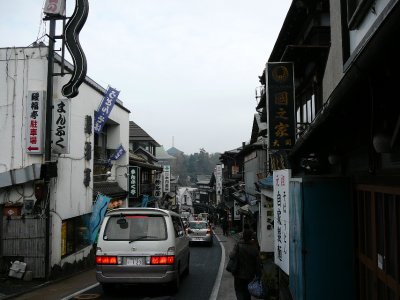 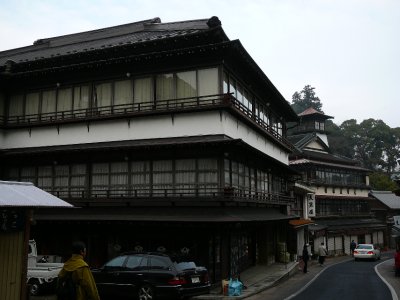 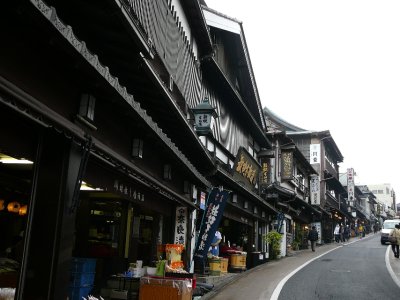 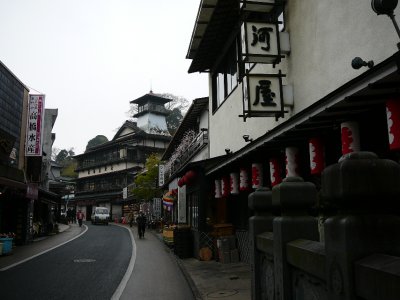 Right down the bottom is the Shinshoji Temple Narita, my first Japanese temple. It was established in 940 AD, although everything I saw was much more modern. 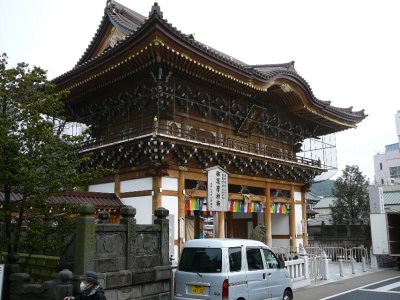 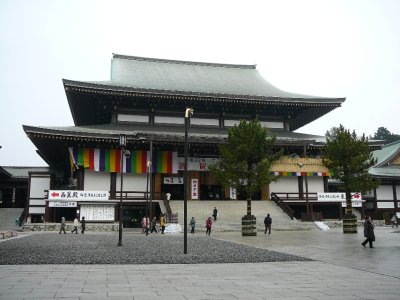 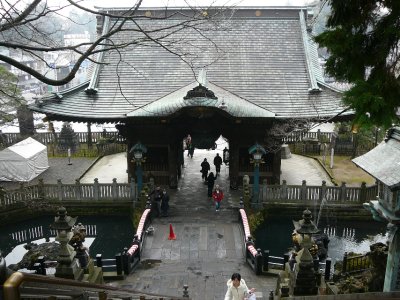 It is a huge place 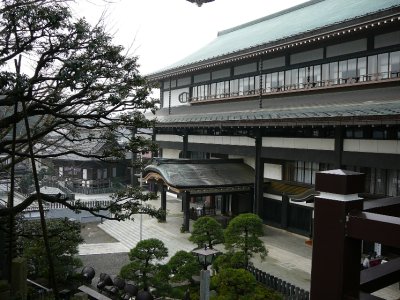 with a tightly packed but quite small cemetary 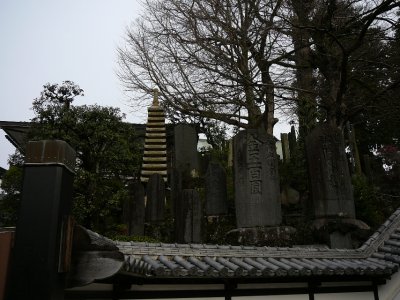 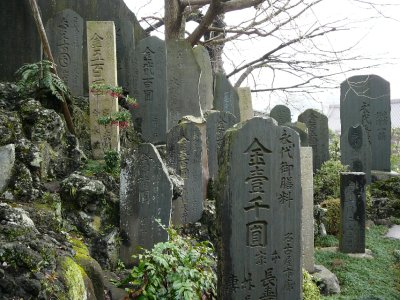 there was lots I did not understand, such as the function of this 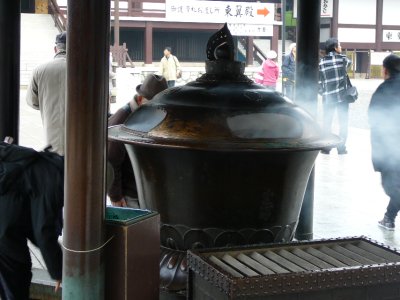 Walking back up the hill to the centre of town, there were many eating places and shops selling quite distinctive products 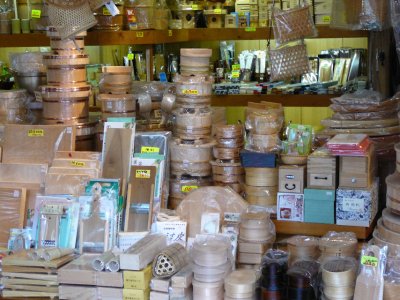 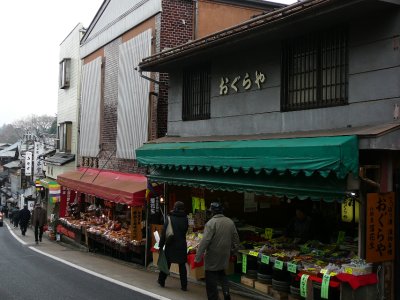 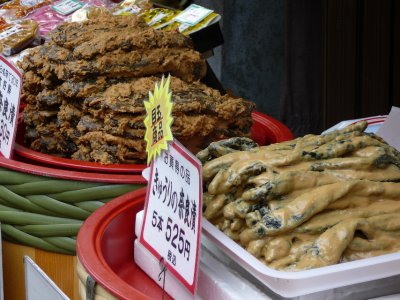 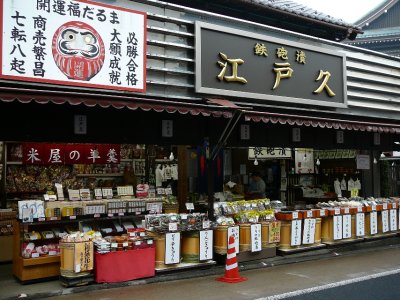 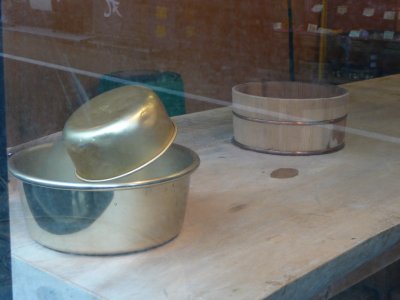 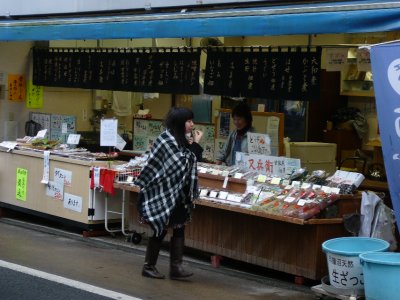 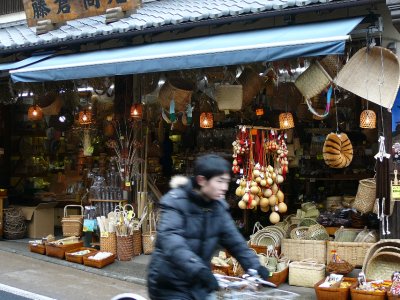 Back in the hotel, another first experience - Japanese television, Japanese cooking shows to be exact. To this day, I still have no idea how they worked. There was very little actual cooking, lots of eating, lots of closeups of people eating, talking but the really confusing thing was that they'd seem to forget what they were about and interpose some completely random story. I'm not sure which was the more confusing: this, or the fact that the only English language programme seemed to be Hustle. No worries - I felt I'd had a good first day in Japan.

Posted by NZBarry 07:29 Archived in Japan