The National Museum is a grand building 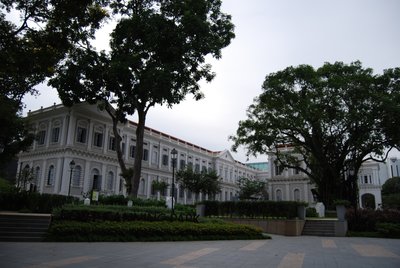 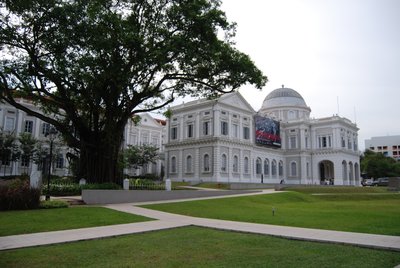 although it looks fairly puny in this shot 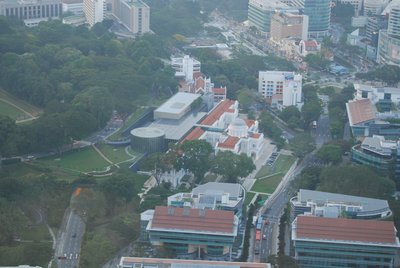 It was established by Sir Stamford Raffles himself as a library and musuem, but its interior has been dramatically updated since his day - lots of glass and steel. I spent the better part of Sunday wandering around. First stop was Robert Wilson's "Voom" exhibit, one that did very little for me. It was a sequence of what looked like still digital images on large TV screens; close attention revealed slight movements, even a very slight narrative in some cases (maybe all, I couldn't be bothered waiting). So, one of these showed Brad Pitt holding a gun, just standing there. After I don't know how long, he lifts the gun and fires (revealing it to be a water pistol). There's about a dozen of these, none impressive. I did score a photo of Steve Buscemi chewing, with a large carcase in front of him (he may be chewing a mouthful of it, who knows?): 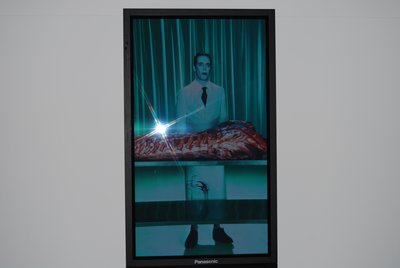 (sorry about the flash - I hadn't worked out how to turn it off at that stage, damn flash new cameras!).

Next door was a much more interesting exhibition; photography of Taiwanese Chang Chien Chi who is concerned with the twinned notions of alienation and connection - the exhibit was called Doubleness, and had three sequences of photos. The first started with a couple of images of faces - to show how the Chinese read faces (by the location of moles) to discover character. [As a weird aside, I'm reading Orhan Pamuk's Black Book and a major part of that is about the history of face reading, where various parts of the face contain letters which can be read.] Anyway, the point of the mole reading is that the Taiwanese use these as the basis of arranging marriages between Taiwanese men and Vietnamese woman, around 80,000 per year. There were more than a hundred photos showing participants in the process; starting with the marriage guidance each "couple" is given, then he shows the auditioning (a bit backwards, I know) progressing through them submitting their documents for approval and on to the wedding itself. All of these wedding photos have the same backgrounds - it is later revealed that there are heaps of couples all lined up at the same table, being married simultaneously. The whole process starts on about the Tuesday and finishes on the Friday, with about a 10% failure rate. Not bad, when the whole thing looks like a shopping trip.

A second sequence was simply of men chained together in pairs; there is a monastery/asylum in Taiwan to which problem men (drug addicts, drunks, the mentally unwell) are sent. There they are simply chained to a more stable man - the only time they are not chained is when they sleep. No-one is ever released, so it is not really about rehabilitation; families simply pay to get rid of a problem. Once there, the guys are put to work - the place is also a huge chicken farm. Then his third sequence was about Taiwanese guys who head off to America to make a better life for their families.

The biggest part of the museum was devoted to a history of Singapore; this was suprisingly lame, as it was very short on artefacts, mainly a bunch of photos but with an interesting audio commentary so you could work out what was going on.

The other component was four themed sections (fashion, film, photography and food). I found the food section fascinating - videos showing how some of the classic Singaporean meals are made, the migration patterns that produced them, a few artefacts (such as the kind of cart used as a mobile kitchen) and then a room devoted to the ingredients and utensils 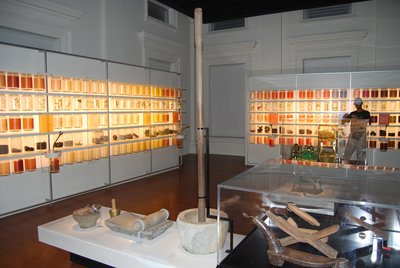