Departure this time was a little more complicated than usual, for two reasons. First, I was leaving someone behind; someone I would rather be with than be traveling away from but my plans were old plans. Someone who had me in tears before I left, for the nicest of reasons. Second, I had things to do; vote and pick up a car in Auckland, so that I could enjoy the second phase of my holiday with the person I had left behind.

I left Dunedin the night before my flight to Buenos Aires, as there was no way I wanted weather to affect my flight out (it was bad enough that I was traveling on an airline with a particularly bad reputation when it came to reliability). I stayed at a hotel near the airport; the Airport Pacific Inn had done a nice deal on car storage for a month. By about midnight, I was feeling peckish and found a service station which doubled as a fried chicken joint. A crew of very large and evidently hungry men wiped out the entire stock of cooked chicken, but I was in no hurry and eventually had my wee box of deep fried goodness. To hell with health scares, for one night anyway.

The morning proved rather damp. I found my bus out to the railway line and the train down to Pukekohe, where I had a wet walk to the local high school. I arrived looking like a drowned rat, much to the amusement of the receptionist. She summoned Rowan, who had the car I was buying, and after a few false starts with the change of ownership process, I was on my way in what seemed to be an absurdly cheap Nissan Maxima. I still had to vote; because I was doing it early, Rowan said I would need to head to Botany, some 45 minutes distant as that was the nearest place. I have to say that Botany is not an easy destination to find; no indication of which motorway exit to take and then, as you approach it, the road signs prove unhelpful. I found myself in a completely different shopping centre, one which seemed to be focussed on South African migrants. Eventually, I made my way to Botany town centre, a place I had vague memories of being sort of interesting. Not so: it is just the standard array of brand name shopping destinations in a slightly different array. Luckily, I found the library, where the internet revealed the comforting news that the voting place was actually in the library. So, that proved easy but, given that there were a dozen places nearby I could have voted, I rather doubt I had to make a mission to Botany to do so.

After dropping the car back at the hotel, I planned to catch the bus to the airport (the hotel was so good, it actually rang me at the bus stop to see if I wanted a shuttle). Somehow, I missed it but thought that since it was only 3 kilometers, I'd walk it. Bad move - I walked down what I thought was the old road to the airport (the new expressway has no footpath) but after an hour or so was confused to find myself at the beach, then to find cow sheds and planes flying away to the north of me whereas I knew the airport to be north of the beach and south of my starting point. In other words - I had no idea where I was. A quick text to work got me a number for a taxi company and eventually I was rescued and taken to the airport (thank God for cellphones!). The flight over was a bit of an anti-climax: Aerolinas Argentina was on time and totally acceptable. My only concern was that they used old style central TV screens to show the movies and one was directly above me.

Buenos Aires airport is fairly low key - a shop, a bar and a couple of money exchanges. I converted some dollars to pesos and had my first beer, hoping to get some coins. No such luck, and the only place to get them was the bank. By this time, the queue had grown rather long, as was the processing time for each transaction. Luckily, as I was fidgeting and wondering if I should take some other method into town, I noticed the fellow in front of me seemed to be a local counting his change: I offered him a 2 peso note for the same in coins, was accepted and on my way. I used the coins in the local bus (it had a machine which only took coins) and, two and a half hours later, was finally in the centre of Buenos Aires. I was most impressed with one woman on the bus; it took some alarming turns, moved very fast and lurched repeatedly, yet she managed to pluck her eyebrows as if she was sitting in the Hilton. I think I would have stabbed myself in the eye!

I did enjoy this bus - it gave me a great introduction to the city and dropped me just a block from my accommodation, Los Patios de Montserrat. This was a fantastic guesthouse with big, airy rooms, 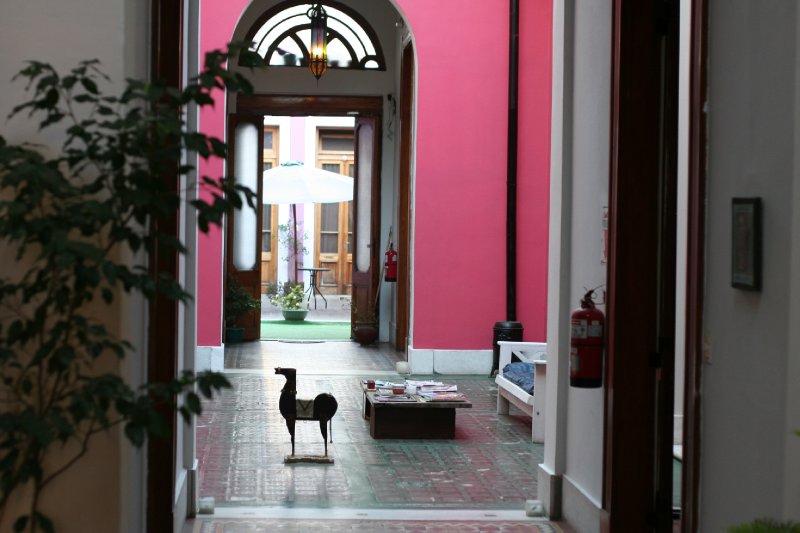 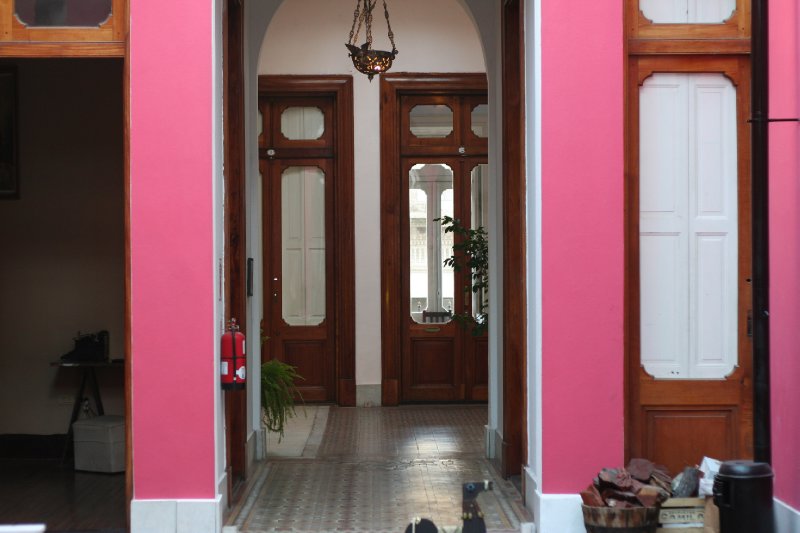 a very friendly host and gorgeous staff just a block from the central plaza. I am not sure what function the building served in a previous life but breakfast was served in the ballroom: 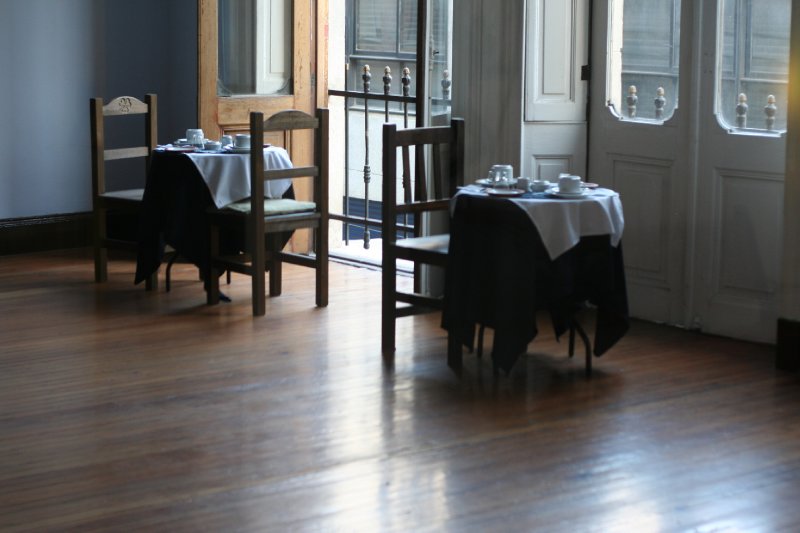 I only had two nights and a day in Buenos Aires; they were spent just wandering around the local area. Within minutes, I found a very posh sort of cafe facing the plaza, so popped in for a beer and a couple of empanadas while I watched the world go by.

The one place I wanted to see was a bookshop in what had been a theatre: 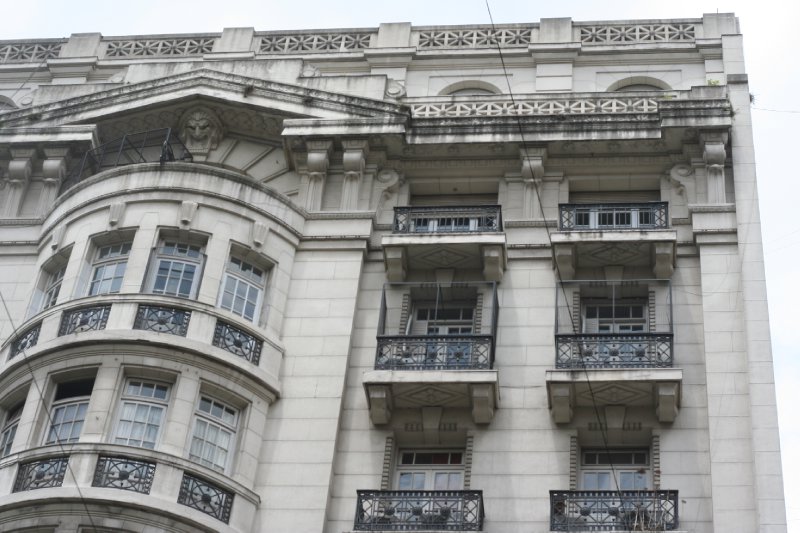 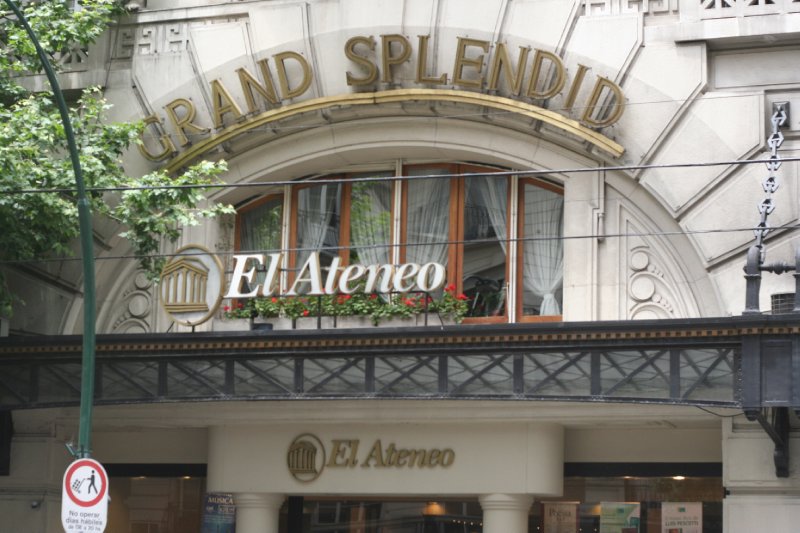 The stage has been converted to a rather pleasant cafe 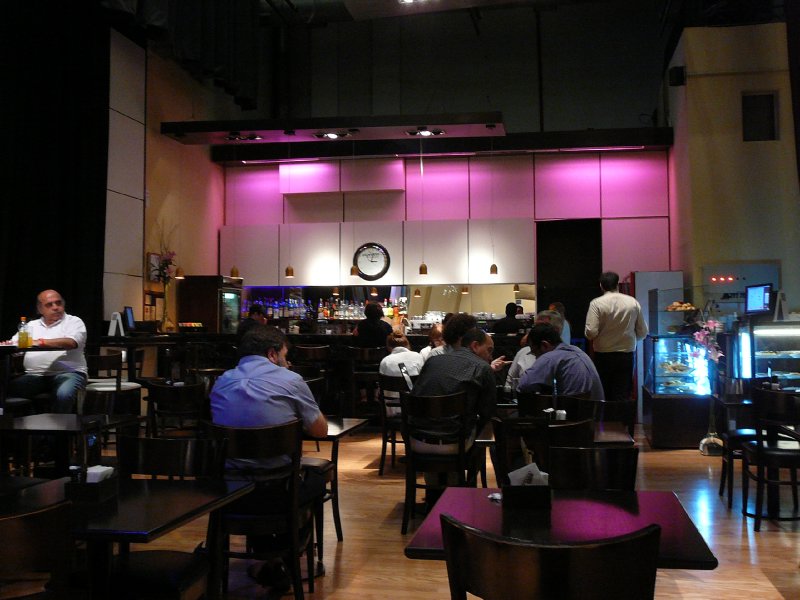 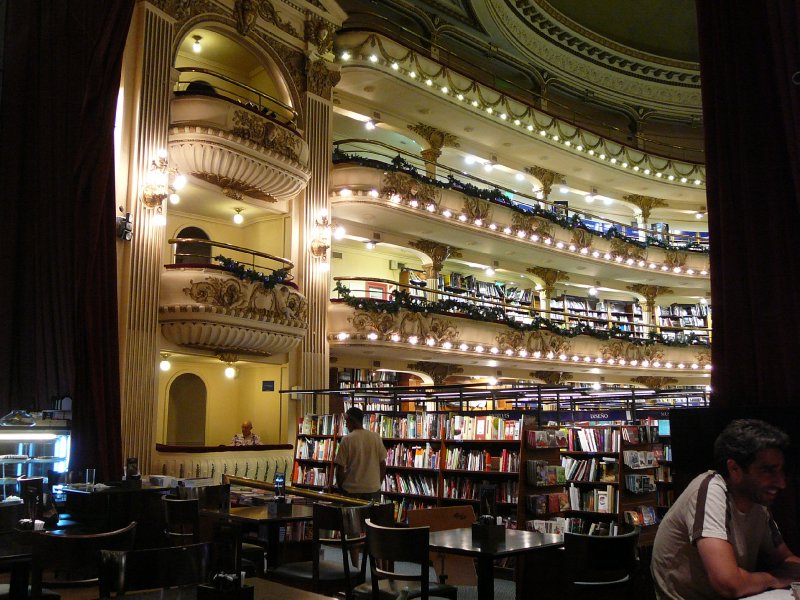 Although I hadn't been in Buenos Aires much more than 12 hours and there was lots of it to see, I thought "bugger it, its my holiday" so just hung out in the cafe, having a beer, reading, people watching - some seemed to have taken up residence for the day. The bookshop was not a whole lot of use to me, as the books were 99.83% in Spanish, and I couldn't even get a useful looking Spanish-English dictionary, so I wandered around for a bit: 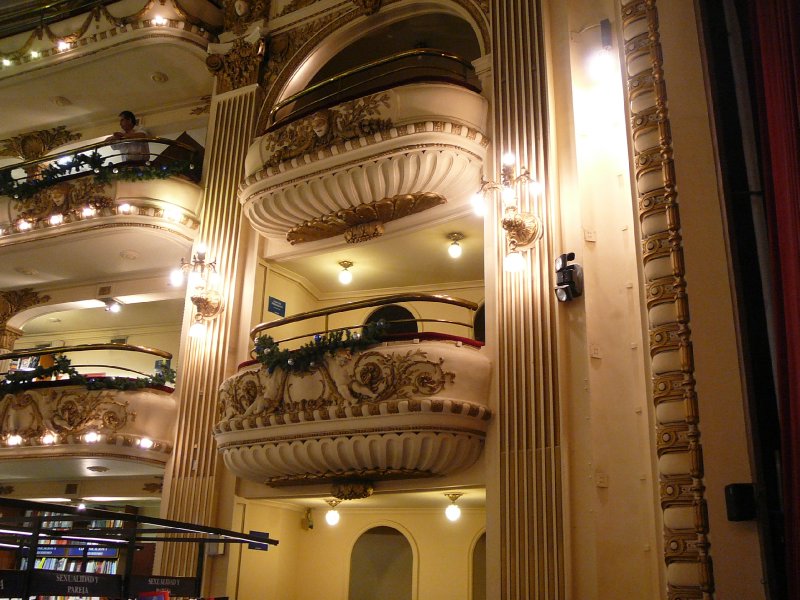 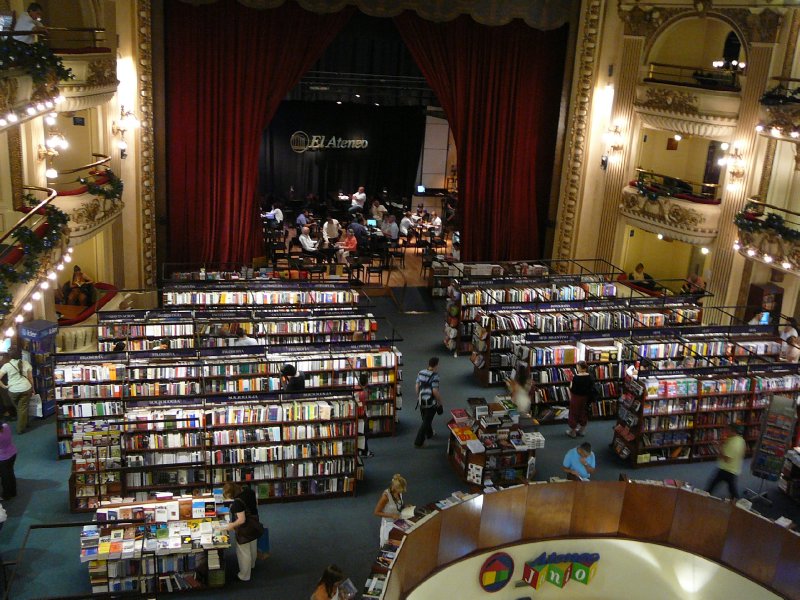 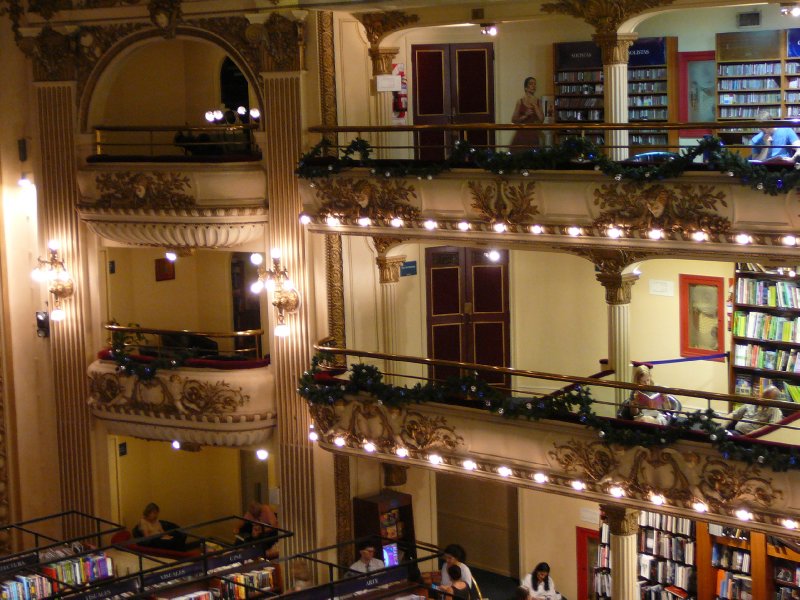 I would have liked to have scored a box for myself, but only the ones on the ground floor could be used, and they were busy 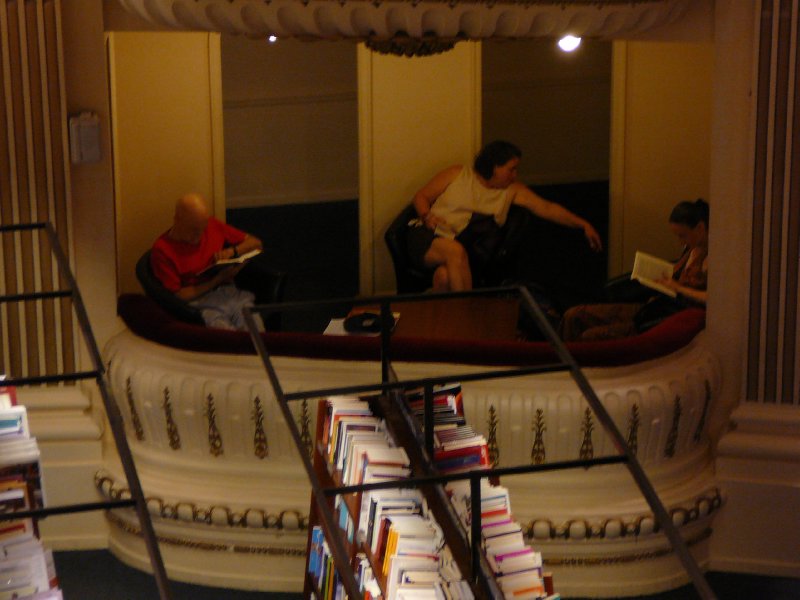 Heading back to my digs, I was most impressed by the buses - they're older Mercedes, but very well kept and shiny (I took way more photos of them than is healthy!). I was also rather taken by this building 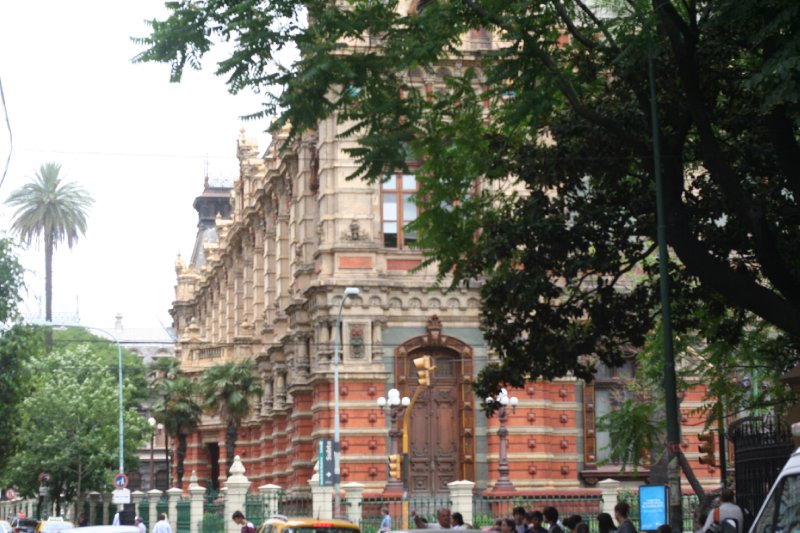 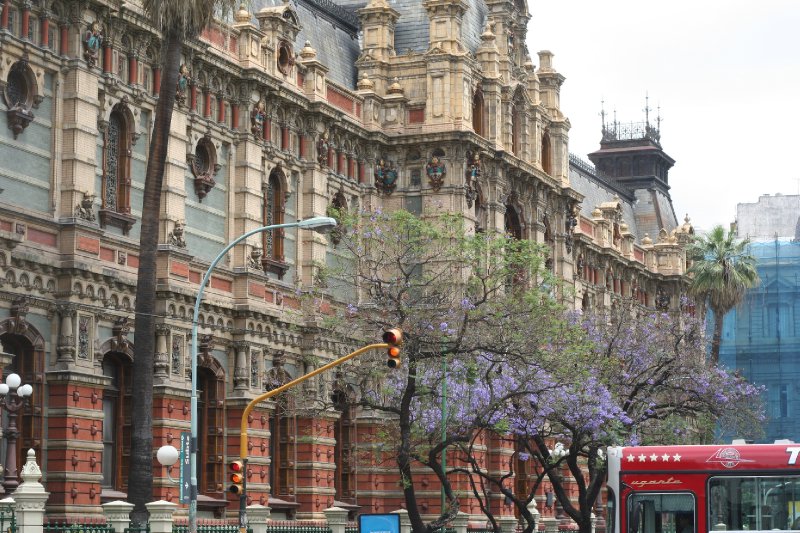 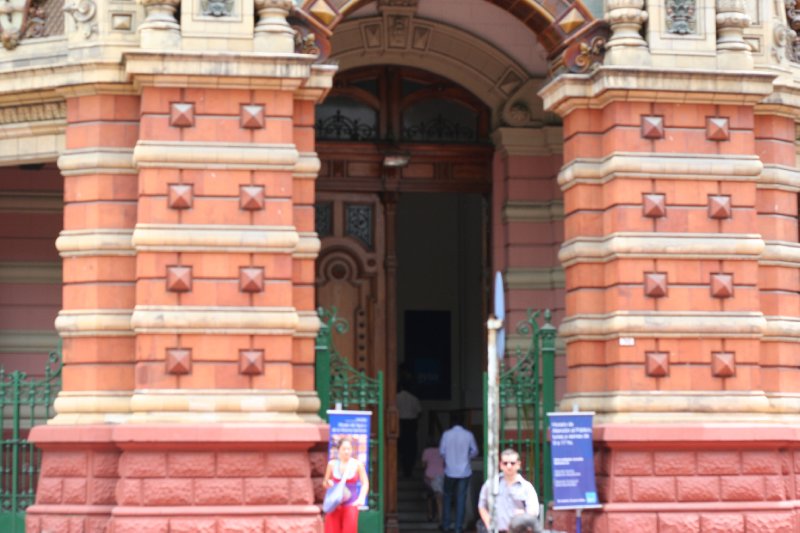 There was no sign indicating what its function might be so I wandered in, to find it was the office of the waterboard, or as they liked to call it, the Palacio de las Aguas Corrientes (Palace of Running Water). There was even a wee museum, comprised of a few ceramic pipes and an abnormal number of toilets.

Oh, and here's how they apparently do takeaways in Buenos Aires: 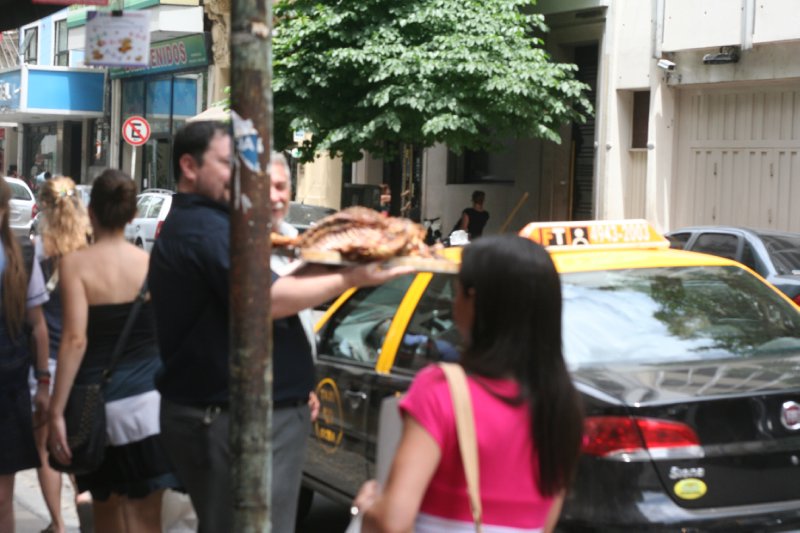 Posted by NZBarry 03:57 Archived in Argentina