Alrighty, I'm getting into seriously touristic stuff now. From Punta Arenas to Puerto Natales is a fairly short bus ride of three hours. Puerto Natales is a small, pleasant town on the Last Hope Fjord - it is called that because of Magellan's efforts to find a sea passage. Southern Chile has lots of glaciers and mountains, which have left many long stretches of water but few actual channels that pass all the way out to the sea. So the Last Hope was his last chance before giving up - of course, he then went on and found the Magellan channel anyway.

Once again I struck gold with my lodgings. The Casa Cecilia is an upmarket guesthouse within a couple of minutes from the centre of town, with a very useful (ie it had cold beer) hole in the wall convenience store across the road. The fellow running it seemed to be a mine of information about the area, so I pumped him for information about trips to Torres del Paine. I took a walk around town - it didn't take long, because it only has a couple of main streets and a very nice waterfront. 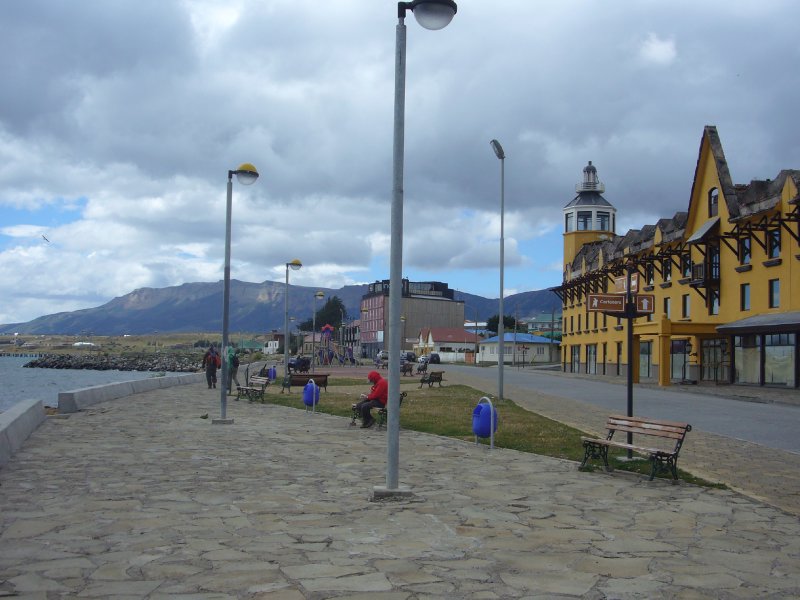 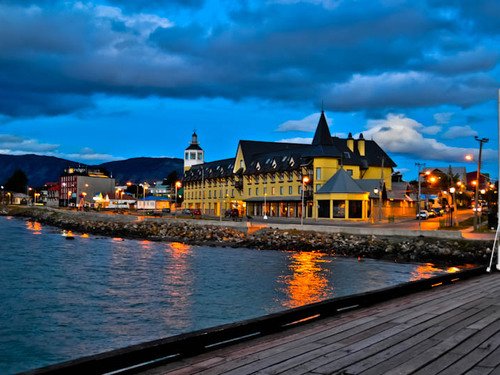 I was only here for one reason: to see something of Torres del Paine, and my man in the guesthouse had told me there are two main ways of seeing it - by bus, which will get you pretty close, or there's a boat trip which won't get you quite so close, but will be much more of an adventure than a scummy old bus. So that's what I did, which involved a fairly early start, down at the pier. First we went 54 miles up the Last Hope in a catamaran, where we saw lots and lots of mountains and several glaciers, waterfalls and the like. Very beautiful - like parts of New Zealand, but on a bigger scale. I did have photos, but they've gone (the photos on this and the next post are a little bit, um, borrowed). One surprising thing about this part of the trip was the awful food - pre-packaged, processed junk. 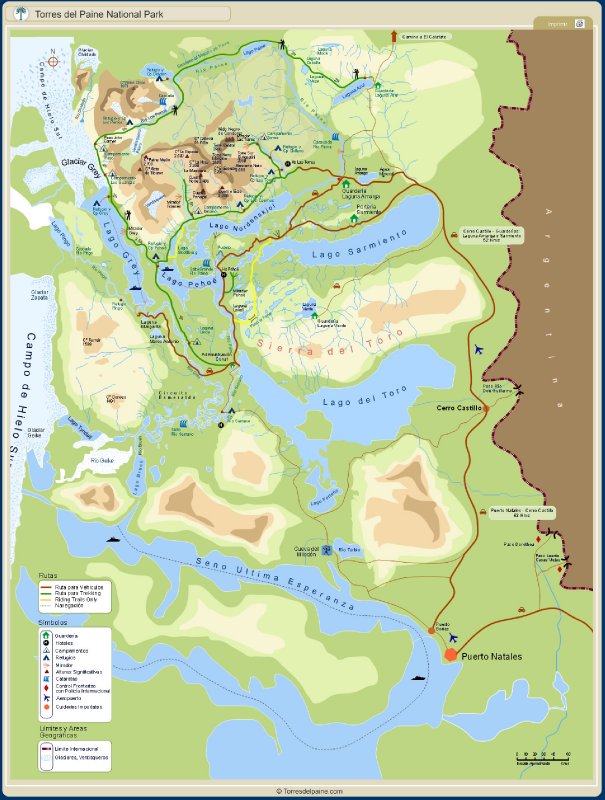 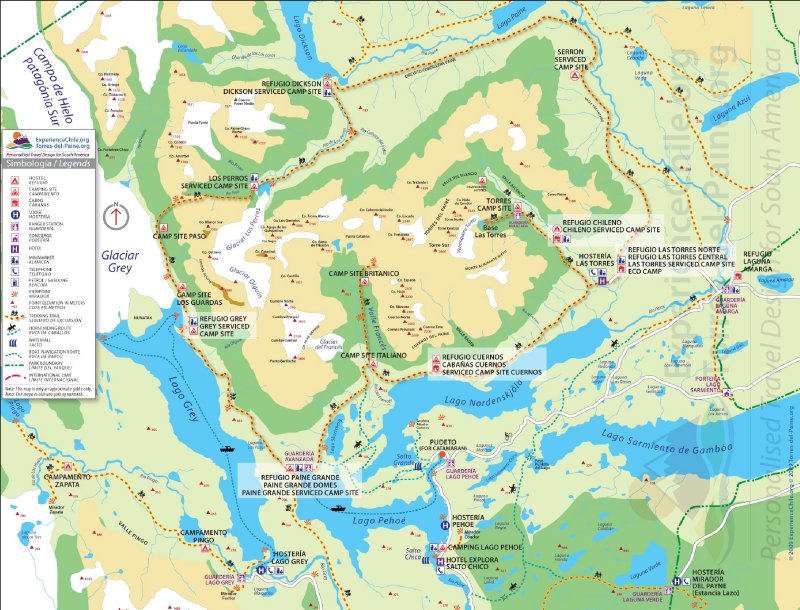 At the end of the catamaran trip, we had a bit of a hike to see a particular glacier, I think it might have been the Grey Glacier 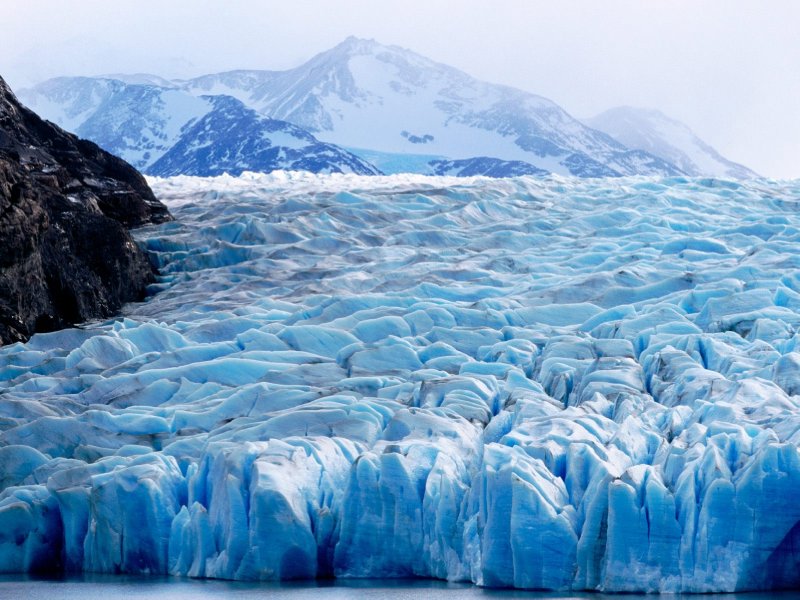 then I dressed up like a bloody astronaut (it was a full body flotation suit), clambered into a zodiac and went up the fjord for another couple of hours, so that we could get a good look at Torres del Paine - these giant granite mountains. The flotation suits seemed a bit of an overkill, as there was never even the remotest bit of roughness in the water. At one stage, there was a bit of a waterfall, which we couldn't go up in the zodiac (obviously) so we had to abandon ship and trudge up and over a small hill. This wouldn't normally be a problem, but I was still dressed like an astronaut at the time, so it was less than pleasant. 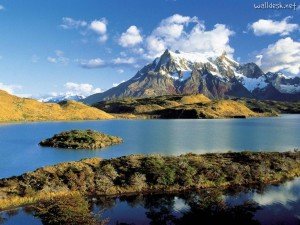 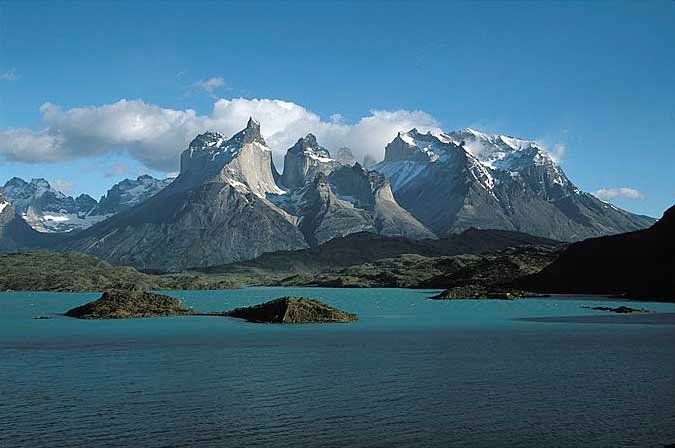 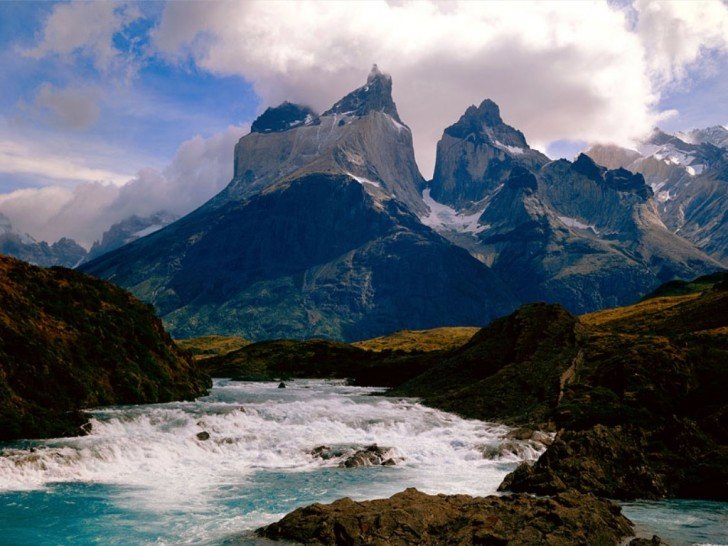 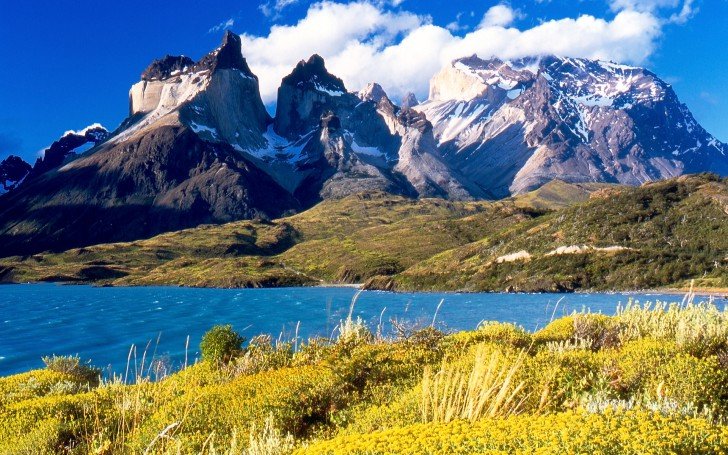 In this last phase, in the zodiacs, there were only 16 of us - three groups (British, Icelandic and Japanese) plus two of us flying solo. Oddly enough, I felt most akin to the Japanese group - they were a bit older then me (apart from one weird guy who never spoke), but took such an active interest in everything and seemed like such nice people that I grew very fond of them (no English spoken, of course). I found it charming that they all got a bit freaked when the boat driver started doing wheelies, so gave them a big smile and they laughed. Their tour leader helped with my fondness - in the catamaran, I had been sitting a couple of tables away from her, and got a bit captivated by her evident character and humour. Then when she got into guide mode, she got quite peremptory - bossed me a couple of times. We finished the tour with a late lunch (roast mutton and potatoes - very kiwi) and a dusty minvan ride for 150 km back to town.

I'd had enough of the Chilean diet, so for dinner thought I'd try the African restaurant in town - turns out that there was very little African to it at all, so I had yet another dinner of salmon (this time with a nice rice curry dish). It was very good, but the thing that put me off my meal was my neighbour - he was one of those very dark, very angry Irishmen you sometimes come across, who had a litany of bitter complaint for his companion, and was pretty much rude to everything she said. Not cool.

I had half a day to kill the next day before my bus and Puerto Natales is a small place, so I had little to do but sit in the sun in the central plaza, reading Chatwin's In Patagonia. I didn't get much of a sense of the place, but of its people and their stories.

Posted by NZBarry 01:46 Archived in Argentina