When I write all day for the day job, it is hard to come home and write more, but I'm getting there. Last post, I was sitting in the main Plaza in Puerto Natales, reading Chatwin's In Patagonia and admiring an interesting building which, as far as my limited Spanish could tell me, was the new town hall - it was certainly quite avant garde for a public building, all glass and odd protrusions and shapes. After a not bad coffee in the vegetarian cafe, it was time to catch the bus for my last border crossing, back in to Argentina and on to El Calafate. Although the total distance between Ushuaia and Buenos Aires is 3000 km, I have already travelled half that and only moved around 200 km, as the crow flies, from where I started. Its a good thing buses are of a very high quality here. The trip itself was uneventful and featureless till right near the end, when we came over the lip of a hill, and there was a huge flat plain below us, stretching out for miles in every direction.

El Calafate is very much a tourist trap, with a main street lined with souvenir shops, restaurants and bars. Luckily, it was a lot less tacky than it could have been, and I ended up spending quite a while in the souvenir shops, buying Christmas presents and just seeing what was what. It also had very good restaurants - I had an average sort of asado and it was my worst meal in town. The other two nights, I branched out a wee bit and struck gold. One was a very traditional looking restaurant, with what seemed to be a single, middle-aged, black-aproned waiter attempting to do the impossible and keep everyone in his busy restaurant happy (there was a waitress serving the rear part of the restaurant and two guys lounging behind the bar). He did a pretty good job, and was very friendly as well - definitely a place I'd recommend if only I could remember its name. So I had an extremely filling mountain vegetable soup with a mountain of bread and then faced down my main course (a local specialty): cazuela de cordero or, less exotically, lamb stew. It was really good, washed down with a couple of pints of artisanal beer: me very happy. In my efforts to find the lake by walking to it (I never did, despite the fact that Lake Argentino is the largest in the country, 20 miles long), I'd noticed a much more modern looking place which looked good, El Cucharon, so I checked that out on my final night. It was very busy, so I had to wait a while before I could get a table, but it was worth it. Here, I had the lomo ahumado, which is a kind of smoked loin steak. I had other things, some veges even, but this is what sticks in my mind. In between meals, I paid a couple of visits to the Don Luis Panaderia (bakery) to pig out on their croissants and various pastries, use the free internet and drink decent coffee (although having so many flies for company was a bit disturbing).

The thing that brings people here is not the big lake, hell you can't even see that from the town, but the big glacier, Perito Moreno. I went on a tour organised by my hostel. First stop was an estancia touristica (tourist farm) where they had the most darling arrangement of goats. One of my room mates got so carried away with a baby goat, she nearly missed the bus. A couple of younger billy goats started playing with each other - it looked like quite a formal game, as they would strike their front hooves on the ground, then head but each other. I was sitting on a log watching them - much to everyone's amusement, the goats got up beside me, and were getting me involved in their game. There was a cafe which one of the local animals, a guanaco, seemed to take great pleasure in bowling into as if it owned the place. My photos of this part of the trip are lost, but I've found a blogger who did the same trip who took quite a few photos, including one of a guanaco.

The glacier was huge (and is still only third biggest in the region): bigger than Buenos Aires city, but very accessible - we could take a boat right up to its southern flank and they've set up a system of balconies and walkways on the north. The thing that got me was its colour - it was a very delicate shade of blue but at the same time very intense. 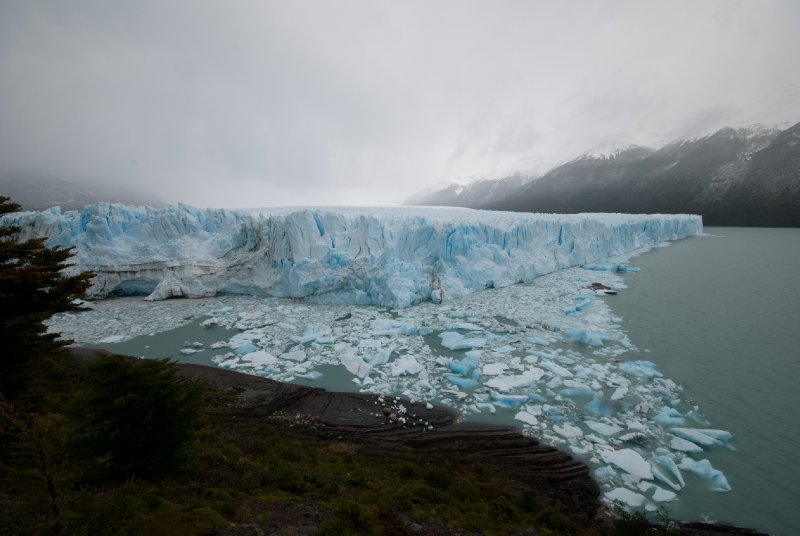 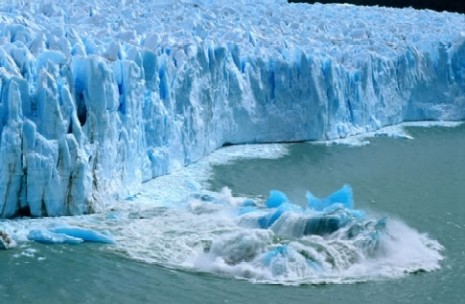 Here's a picture of a boat something like the one I was on: 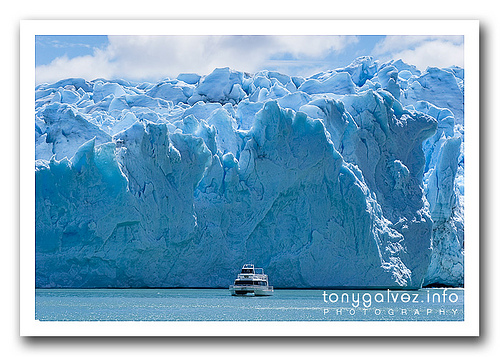 Every so often a chunk would fall off: a room mate from my hostel was on a much smaller boat and they'd get a fair old buffeting when that happened. Another thing which got me about the glacier was the huge power it wields - I could see the deep gouges in the cliff face it had made and then twisted. The guide told a story about how the local farmers wanted the government to stop the advance of the glacier; they bombed the crap out of it but it made no difference. I was just imagining what it would do if it started advancing towards the balconies - they would be toast. Sitting on them, I could see the glacier top running back to the horizon. I could hear the occasional crack of some ice falling off - every ten years or so, there's a significant collapse, and there has been one since I was there. Someone thought to take a video:

My last morning in El Calafate was very pleasant, my three room mates (two British women and another from Belgium, all in their 30's) had been friendly, so when they invited me to breakfast, I couldn't say no. It is funny that I spent a couple of nights sharing a room with them, had breakfast for an extended period, even had my photo taken and it never mattered that we didn't know each other's names.

Posted by NZBarry 04:24 Archived in Argentina

That's quite an exciting video considering it's just some ice falling down!