In Argentina, one of the cool trips is to take the fairly arduous bus ride up the Ruta 40 from El Calafate to San Carlos de Bariloche: it is mile after mile of mesmerising nothingness, but somewhere near the Andes. I had the vague idea that it would be quicker and more interesting to cut across to the East Coast, go up to Puerto Madryn and then head west again to Bariloche. I also had vague ideas of catching a weekly train from Viedma to Bariloche but, alas, that was not to be.

So, after a long, lingering breakfast with my room-mates, my first hop was south-west to Rio Gallegos, less than 50 km from where I was a week ago (300 km, making it 1800 km traveled of the 3000 total). There's a fairly heavy Police presence on the roads in Argentina - we had to stop frequently to check in with them: I have no idea what the object of the exercise is. We even had the Police come and tick us off the manifest a couple of times. Finally, in El Calafate, a Policeman did something: he told a bloke in the seat next to me to put his shoes on, 'cos there's a sign saying "Do Not Remove Shoes". The reasons for that in a crowded bus are obvious, but is that proper use of the Police? I think not. 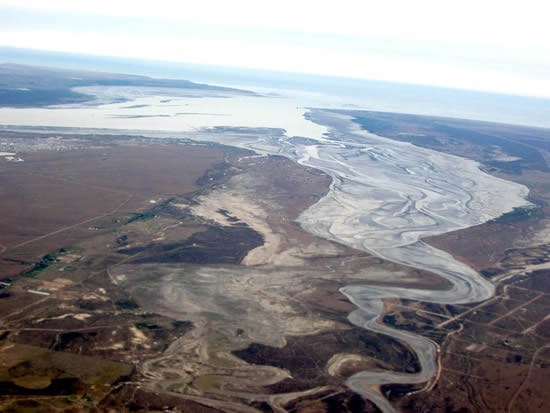 Rio Gallegos is at the mouth of the river of the same name (although largely the town ignores its riverine location - no hotels built on the river front, and just one restaurant). It is just a typical Argentinian provincial capital, no more a tourist destination than Invercargill or Palmerston North - most people are there to change buses. I actually found it quietly appealing - I stayed in a decent hotel and found a couple of good cafes (Cafe Monaco and Cafe Central) and the main plaza to sit and people watch, along with several heladerias (ice cream parlours - I love that the spanish language has specific names for various shops - you also buy bits of chicken at a polloteria). In Cafe Monaco, I tried to catch up with the local TV news in Spanish - there were images for the Day of the Virgin celebration (which was major league party time, like the opening of the Rugby World Cup, with bands, light shows, fireworks...). So when I saw another item about the ascunsion of Cristina, I thought it had to do with the recognition of a new saint: hardly - Cristina is the President who has been re-elected (it is a bit of a scandal - she is the wife of the former President, who had served his maximum two terms but has brought her in as his puppet (shades of Putin)). Another was about the local body elections and another was about various murders. But with all this going on, the thing they devoted by far most time to in the hour I watched was someone being voted off the local version of dancing with the stars.

Then it was time to head north, up a coastline I barely saw. This bus was a bit of an experience: 18 hours and something like 1200 km to Puerto Madryn (making it 3000/3000 km and I'm a long way from Buenos Aires). I went for the full first class experience, with a big leather reclining armchair (not quite as comfy as my Lazyboy chairs at home, but close). I have to say the dinner was very nice - just your basic roast beef and potatoes, but cooked as I might cook them at home. I expected something special in terms of service, as I had executive class, but didn't get anything more than the other passengers. A competing company serves champagne in their buses: buses here are GOOD!

One reason for coming to Puerto Madryn is that it is in the centre of an area settled by Welsh people, but I didn't see many signs of that. Another reason for coming here is to go whale and penguin watching, but I can do that at home. The third reason? Dinosaurs! All round here was dinosaur land and there's a very good museum (Museo Paleontológico Egidio Feruglio) devoted to them in a nearby town, Trelew. I was in awe, looking at some actual dinosaurs. I read about them in Chatwin's In Patagonia but I never thought I'd see any. It has the skeletons of several dinosaurs and has painted up big murals to give an idea of their habitat: fantastic. 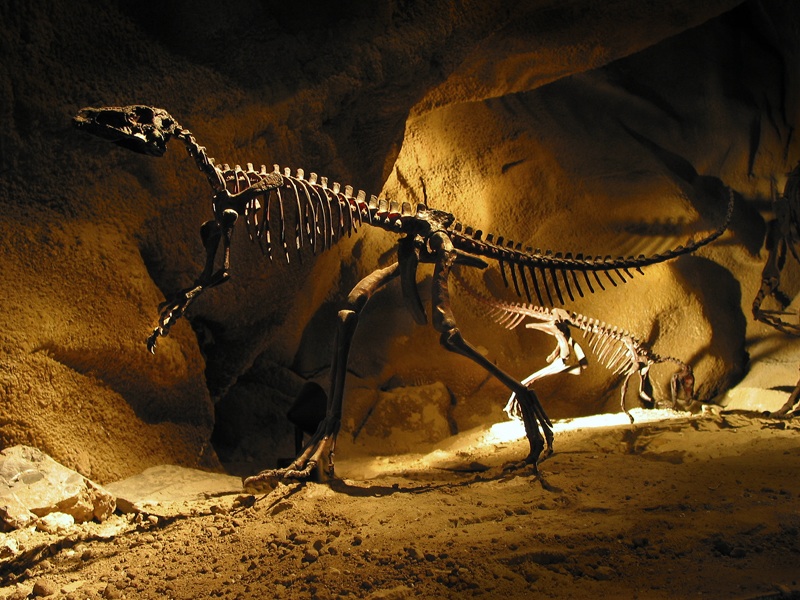 I actually went to Trelew for a Welsh nosh up, because this was the heart of the Welsh settlement, but never found anything looking remotely Welsh. Instead, I had a pretty good burger in a local competitor to McDonalds (not that there are any of them around) and a beer at the Hotel Touring Club - built 1898 and hardly touched since. It had some famous visitors a bit before my arrival - Butch Cassidy and the Sundance Kid. Apparently there is even a wee museum on site but I had no idea at the time. The cafe was pretty old school, but seemed like a comfy place to read and drink beer, so I did. 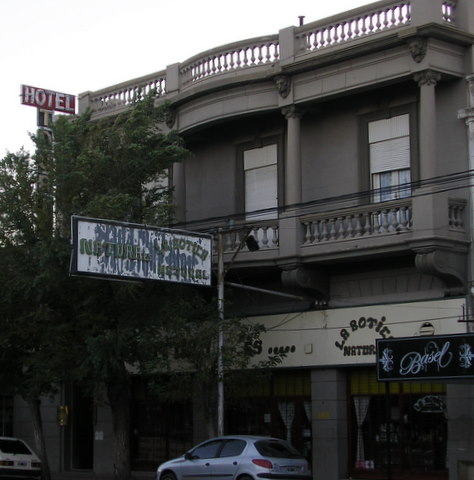 I wished I'd stayed here rather than in the hostel in Puerto Madryn - the town was a bit average and the hostel was infested with Frenchmen shouting at 2:00 a.m. When they finally shut up, the nightclub started up and was still pounding away when my room-mates got up at 8:00. This and the lack of sheets or any ladder to help me off my upstairs bunk and the fact that the bed actually broke as I tried to leap off it led to me cancelling my second night and high-tailing it out of town, bound for Bariloche.

This didn't go well. At about 4 in the morning, we were pulling out of this random bus station and the driver stalled the bus. He could not get it going - around 8 or 9, the mechanic they dragged out of his bed got it running, but there was still some sort of problem (no-one at all was speaking English, and my Spanish doesn't extend to the finer details of bus mechanincs, a sad and curious omission, I know). So around noon (when I should have already been in Bariloche), a replacement bus turned up. Have a good look

This bus took me as far as El Bolsón, which is near where Butch Cassidy & Co holed up, but since I was the only passenger continuing from there to Bariloche, they decided not to bother with me and dumped me outside their (closed) ticket office. When it finally opened, the very nice lady there got me a ticket for a different bus company. It is in this process that I had a tragedy: I was tired and confused and had no real idea what the bus driver was trying to tell me. All I got was that I had to get off - which I did, but unfortunately my camera remained behind. Hence, no pictures for the last few days. I was very hungry, so much so that I managed to stumble in to a closed sandwich shop - the guys were sitting around drinking wine, eating and having a good time, but they were kind enough to cook me up something.

So, I arrived 7 hours late, the hostel had decided I was not coming but luckily had another space for me - which just so happens to be with my English lady friends from a week back: Emma and Laura (you couldn't get much more English than that). The hostel guy rang Bus Jacobson for me to try to track down my camera: their first response was to deny their bus was involved. I never did get it back. But my hostel was fantastic - it is on the 10th floor of a regular city office building, but gives great views of the lake. 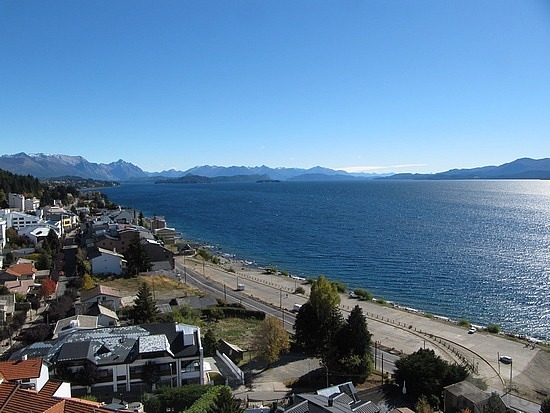 Posted by NZBarry 02:34 Archived in Argentina