I spent a few days in Bariloche with not a huge amount planned. After my journey from hell to get there, all I wanted was a beer, something to eat and then to curl up in my bunk in the hostel. I did all three, but I have to say the dinner was the worst I've had all trip. It was in a place billing itself as a deli which had a very nice sounding chicken dish on the blackboard. That had sold out, so I took their lamb steak instead - big mistake. Everything about the meal was dry, the table was rickety and the meat was tough so every time I tried to cut it, the table would shake all over the place and my wine sloshed out onto the table. I didn't manage to finish, but the woman who served me was so nice, I waited till she was in the back somewhere before I paid and slunk out. I spent the evening having a quiet beer in the hostel and reading.

Bariloche is quite a special place, what with the Nahuel Huapi Lake and the alpine feel to the town (from about 1935, there has been an attempt to create a homogeneous look to the town, using wood and stone, although there have been numerous lapses) 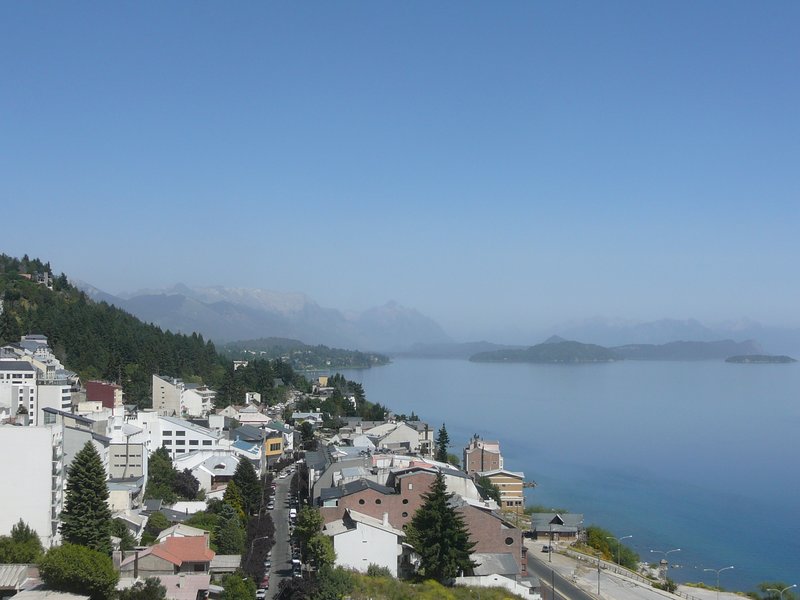 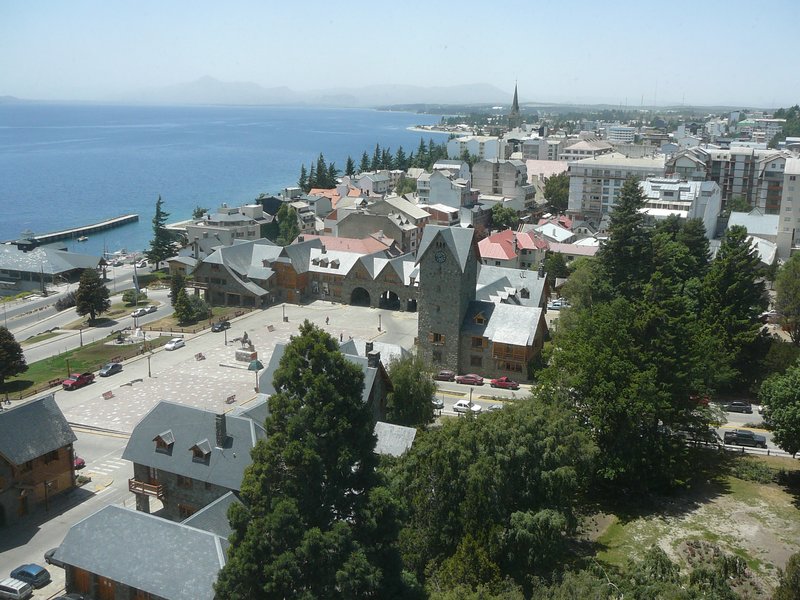 but I got so relaxed that my daily activities dwindled to zero, which is never good when you're on your travels. The hostel in particular was hard to leave each day - friendly and a very homely common area, with couches and a big balcony to watch the lake. On my first day, the only three things I managed to do were track down a charger so I could get my spare camera operating, get a memory card for the camera and have a huge lunch of barbecue chicken. Getting the charger was a bit of an adventure: the hostel gave me a card for a place they thought might help and wrote down what I wanted in Spanish. That place didn't have anything, but suggested another place. This happened several times before I finally struck gold, quite a way up the hill above town, in a shop which sells electronic gimmickry. As for my memory card purchase, this was a bit different, as the fellow insisted on making sure the card worked before I left the shop. My second day wasn't much better - I wanted to see a particular hotel, and took the bus out the lake to where I thought it was. After walking for several kilometres, I gave up. Back in town, the centre is pretty but dominated by shops selling chocolate. This is normally a good thing but the place was so hot, the last thing I could face was chocolate.

On my third day, I caught the bus back out the lake, determined to find this hotel. It turns out that it wasn't hard, as it is at the very end of the bus route. This hotel was built by a famous Argentinian architect, Bustillo (poor fellow - he built the thing in wood and it burnt down within months, so he did it again in stone). The hotel looks a bit haphazard from the outside, I suspect it has been tinkered with, 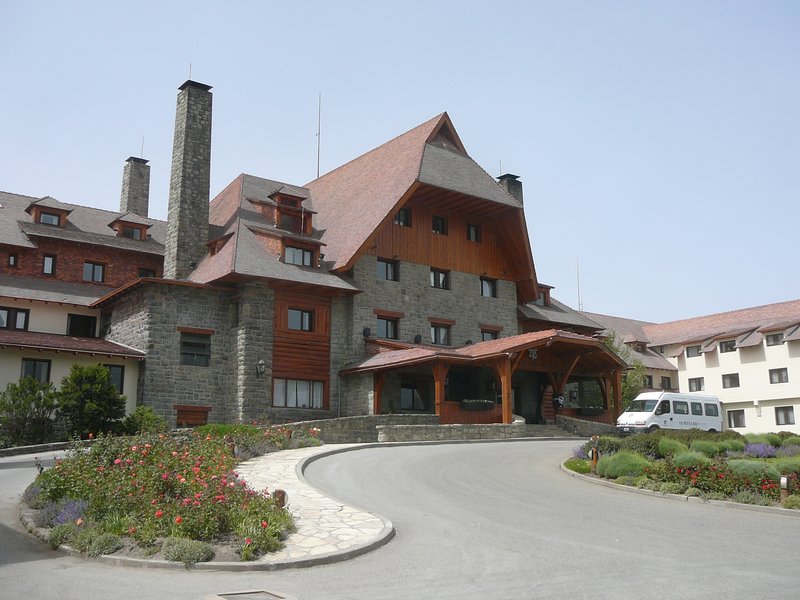 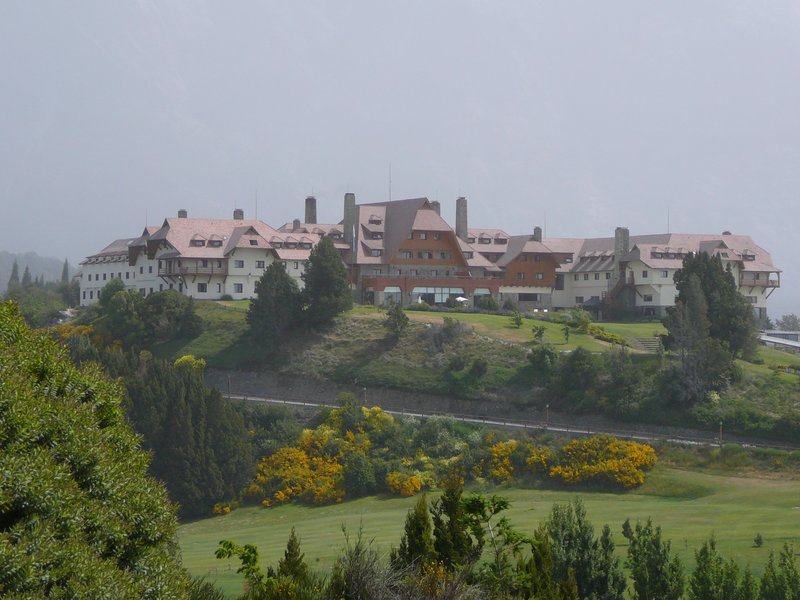 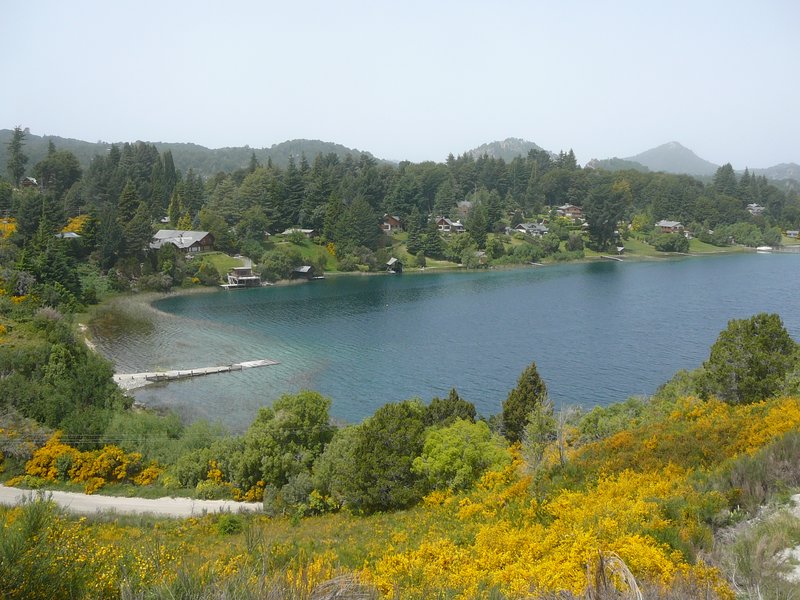 but I went in (after the challenge from the gateman who didn't seem to think I was 5 star hotel material) and it was amazing, one of the most authenticaly posh experiences I've had. 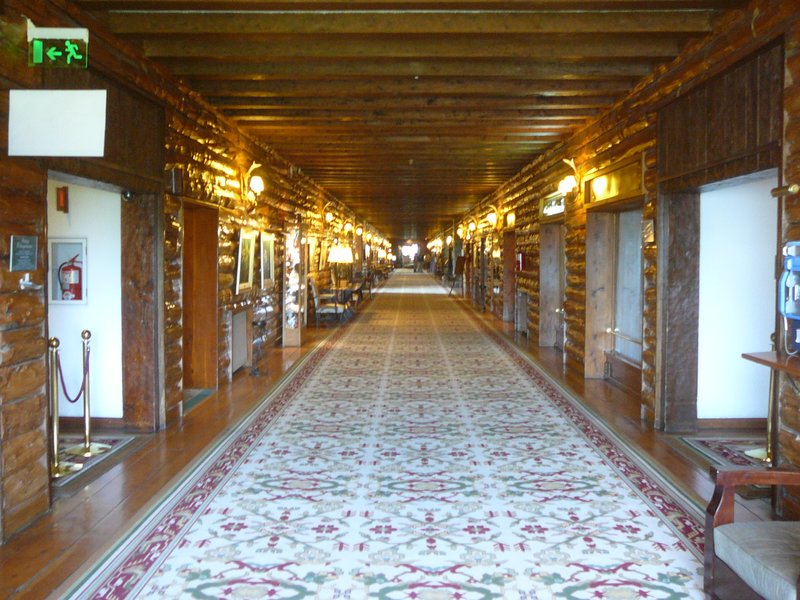 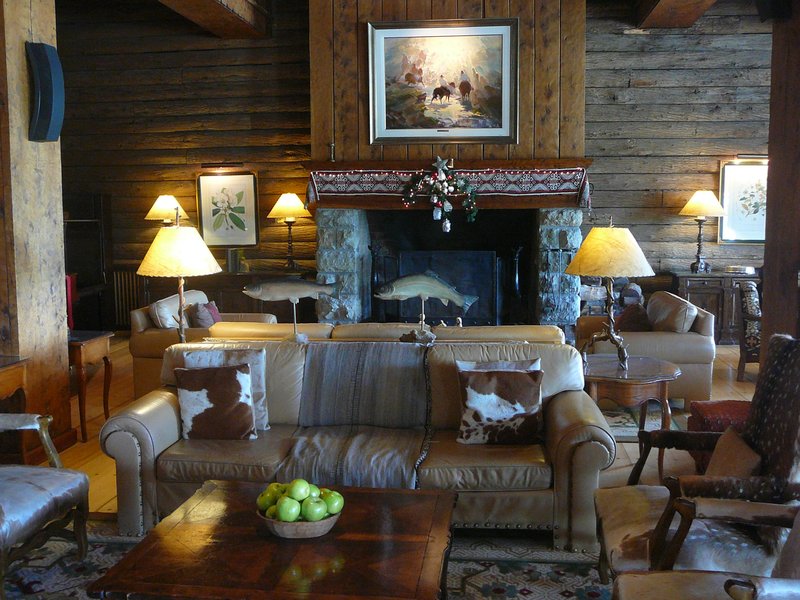 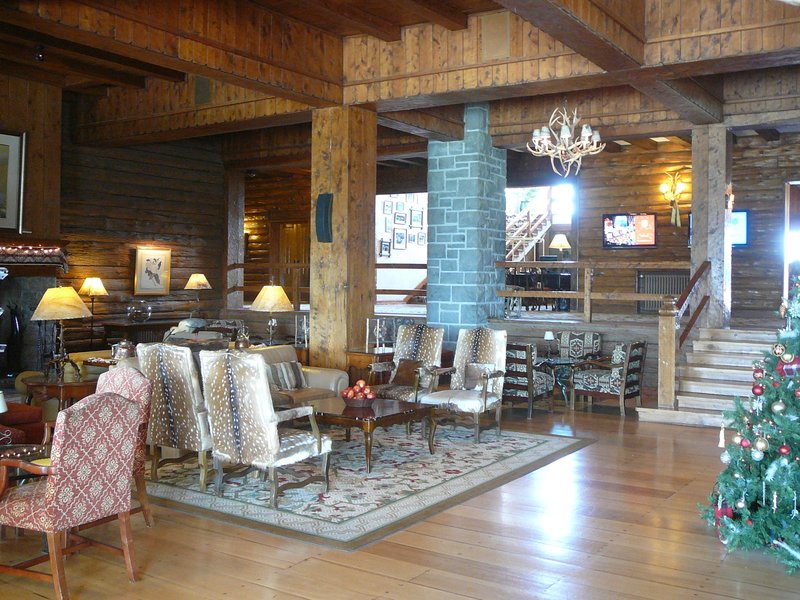 I was a wee (sorry about the pun) bit confused by this fellow: 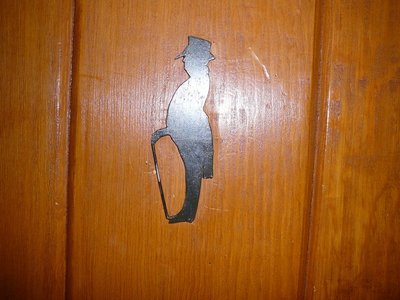 Since it is$US250 + to stay there, I just had a beer and some lunch - sat in the conservatory overlooking the lake and just enjoyed the experience. 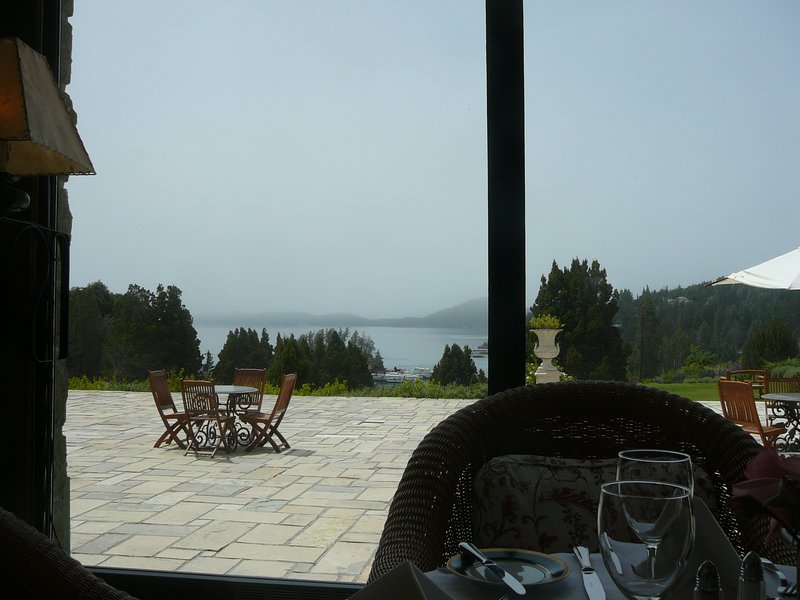 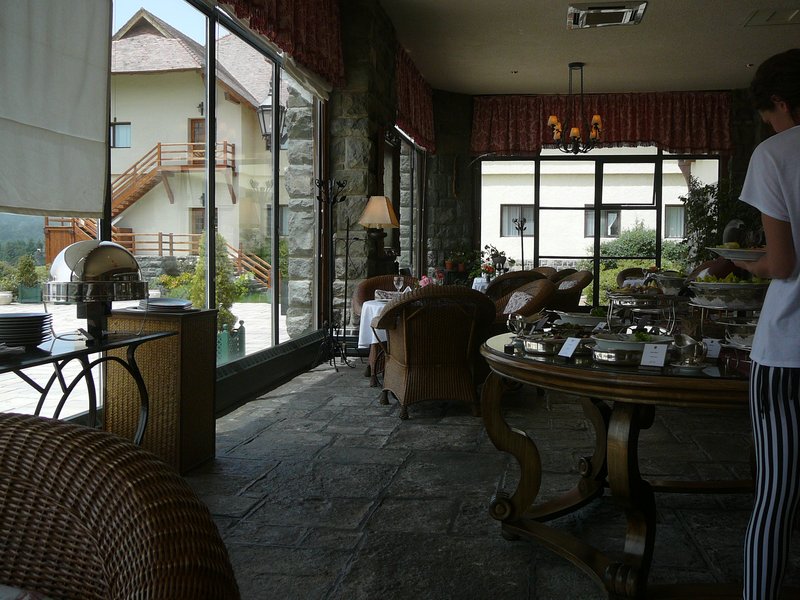 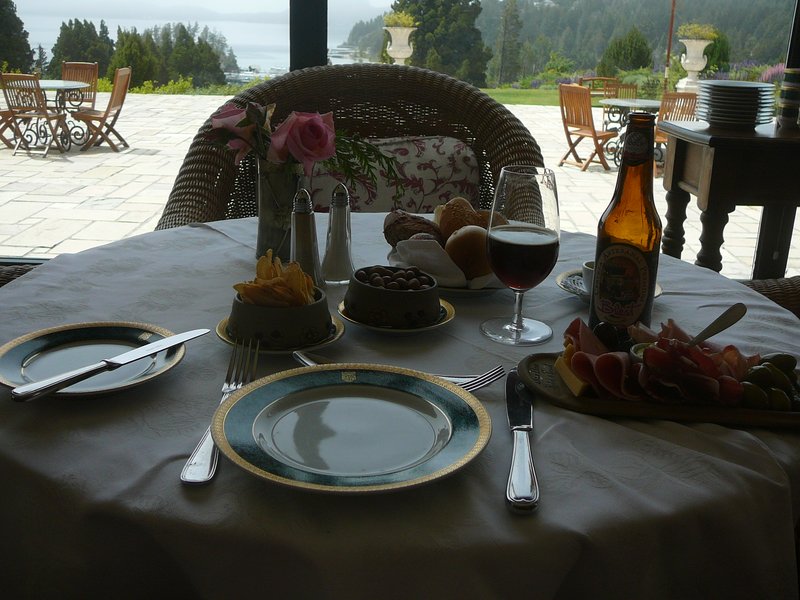 There is a church built to reflect the style of the hotel, at least as it was originally: 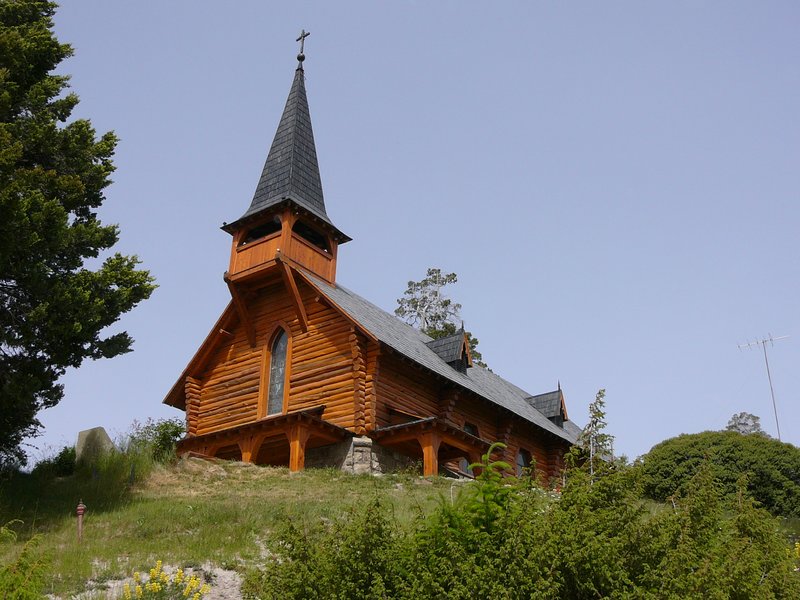 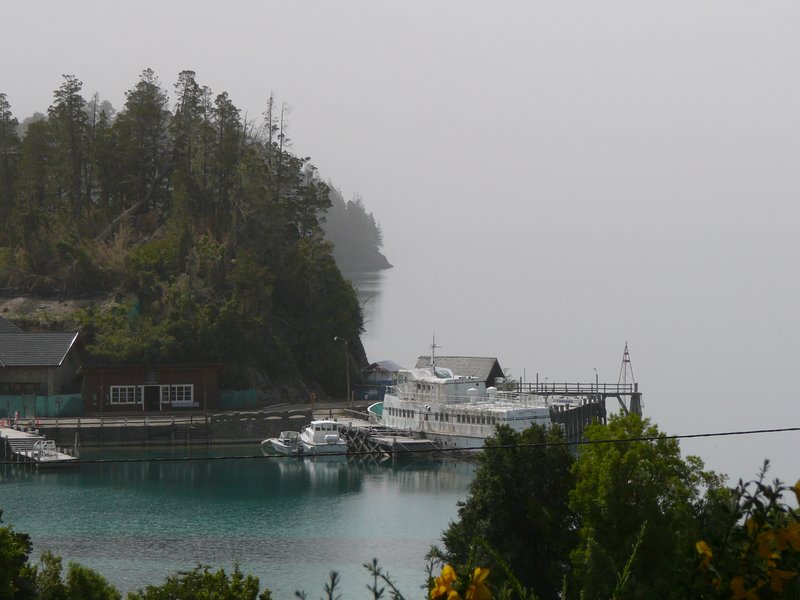 On my last night, I decided to splurge a bit, and dine in a nice restaurant on one of the local specialities - wild boar or trout. I picked a flash looking restaurant called Juaja (described as "a consistently pleasing place"). I had the trout and a decidedly queasy night.

Posted by NZBarry 04:31 Archived in Argentina