So, as I said, I had the trout and a decidedly queasy night. This was not good, in that I had to get up quite early and catch a minibus, one which was going to take me on a 184 km drive, and not all of the road was in a very good condition. My travel guide describes the Seven Lakes Drive as "a magical experience: a winding road through a wonderland of lakes embedded in forest-covered mountains", which is why I booked the trip. The van was full, but I was the only one who spoke English. I'm afraid my account of the drive will be a bit muted. I was actually OK as far as Villa La Angostura, and got out there for a walk around the town. After that, we did indeed pass a number of lakes, there may well have been seven, and they may well have been pretty, but my queasiness was taking on an alarming dimension. I really didn't want to embarrass myself and really didn't know how to stop the van if I needed to. Luckily, very luckily, we were stopped at a lake when the torrent came. Several times. The driver gestured to indicate the poor road - somehow I said I'd had a bad fish, and he understood, gave me a look of sympathy. For those who want a nice description of the drive, here's one and here's a blogger's account of coming the other way.

By the time we got to San Martin de los Andes, I was almost OK again. I had a really nice small hotel, Hotel Antiguous, which was almost brand new. 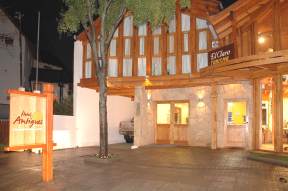 After a bit of a look round town, I really needed to lie down for a while, emerging only once more to grab some random food. Next day, I did get to walk around town: it is a most perfect town, set in a steeply wooded valley, with a lake at the open end. They seem to have maintained architectural standards pretty tightly, so that most of the buildings have followed Bustillo's lead and used lots of varnished timber and a chalet style - it really is most attractive quite posh: the shops dominating the mainstreet sell high end outdoor equipment. 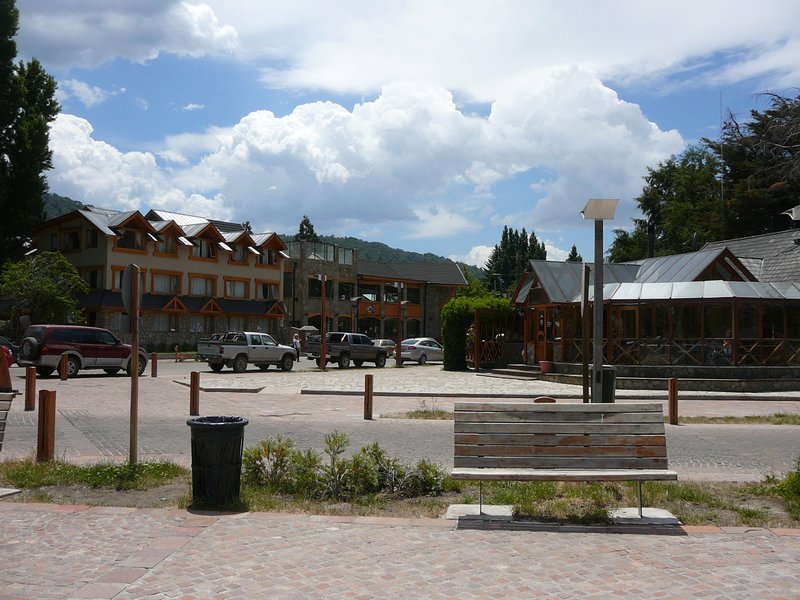 Although I was feeling a bit weak and off eating, I did stop in at a nice wee cafe for a coffee and medialunes: another fellow had a coke which somehow seemed so enticing, in its glass bottle with crown cap, that I had to have one as well. I went for a bit of a hike up through the woods, hoping to find the top. I was a bit under the weather so had to stop more frequently than normal, and had quite a nice chat with a local family at one stage. They told me there were many paths heading to the top - somehow, I took a wrong turning and was heading back downhill: I didn't fight it! 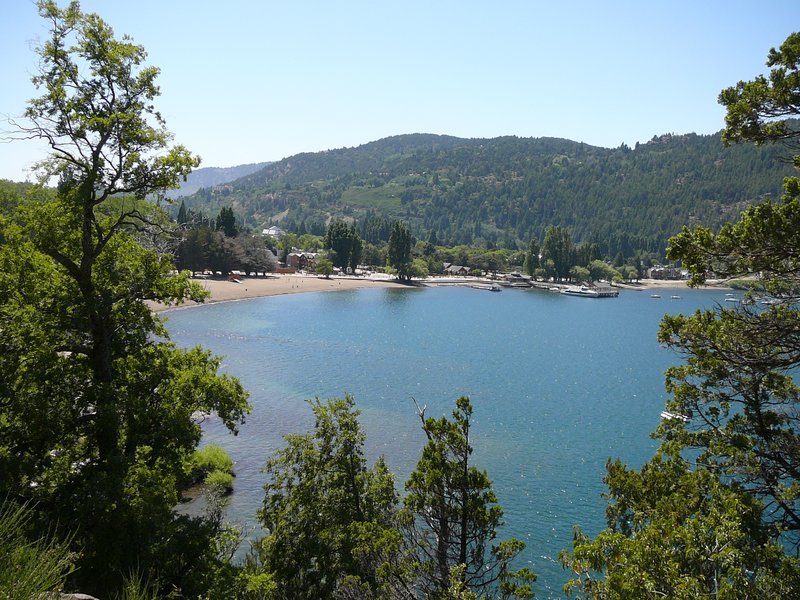 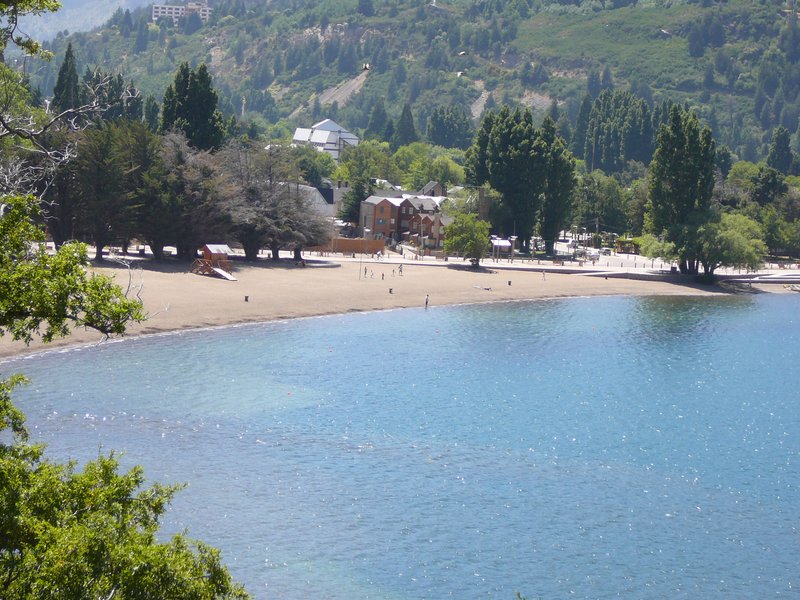 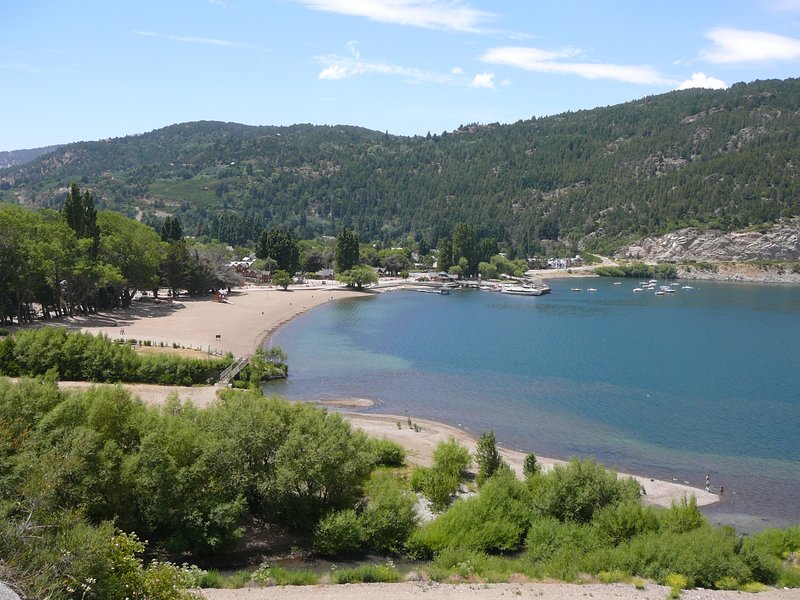 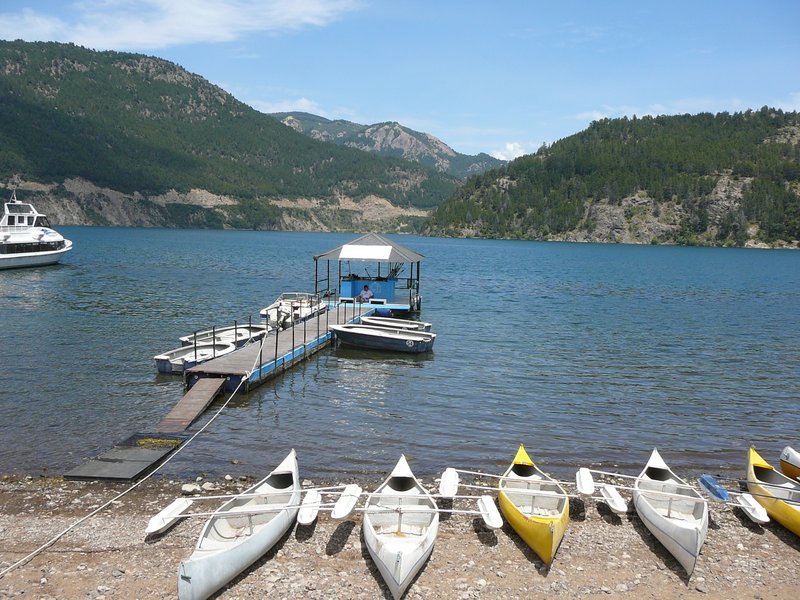 In the evening, I had a couple of recommended places to dine: one I am yet to find and the other was very full, so my eating experiences were pretty undistinguished.

I had planned to head north to Mendoza and across to Buenos Aires, but time was running short, so I decided to make a run for the coast: I had a week before my flight out and about three days worth of bus travel. My first jaunt was to a place called Neuquén - I had no particular reason for stopping here, save that I wanted to break the journey. It is actually the largest city in Patagonia, and the first place I've seen McDonalds and the like since Buenos Aires.

I made a bit of an error in deciding to walk to town, as I didn't quite realise how far away from the centre of town the bus station was, or even quite know where the centre of town was. So I dumped my stuff in a hostel I'd found near the bus station and walked. Then I walked some more, before doing a bit more walking. The centre of town was at least 30 blocks from the station, for those who knew where they were going. I didn't, so headed a bit off the direct route, found myself in an awful shopping mall - small and cramped. As a result, when I did finally get to downtown Neuquén, I was pretty tired and it was quite late in the day. It seemed like quite a nice place. I really don't know what my head was doing, because it refused to stop and eat. Walking back my 30 blocks, there were all sorts of shops, some would sound enticing, by advertising pollo [chicken] for example, I'd get all excited then find it was in its raw form. And thus I ate in the bus station, the positively worst food of the entire trip: an extremely dry and chewy burger.

Posted by NZBarry 05:30 Archived in Argentina