My last couple of days in Hanoi were basically spent wandering around without much of a plan, eating when I was hungry, popping in to look at things that looked interesting, sitting in parks and the like. The one specific place I visted was the Vietnam National Fine Arts Museum. This did a good job of showing the historical development of local art, but I have to say that only about three elements of the collection really caught my eye. A large ground floor space was given over to the work of one artist: some of it was quite eye-catching. 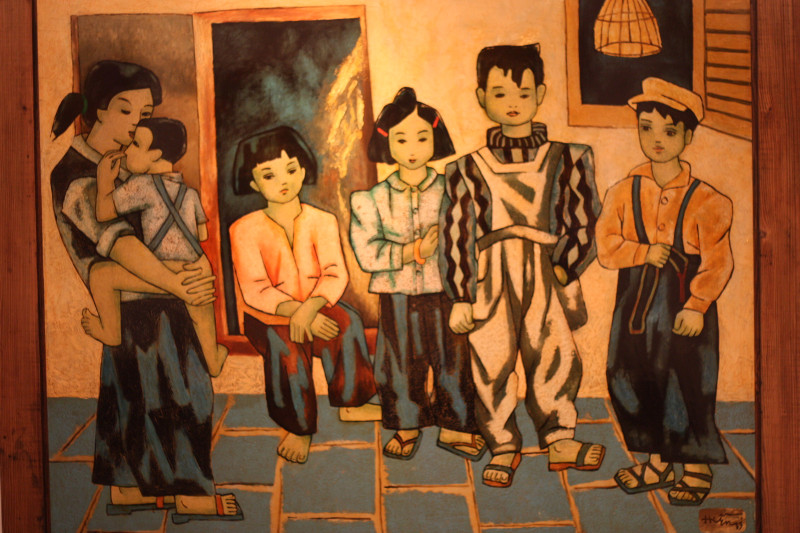 I couldn't quite work out the technique but assistance was at hand, in the shape of the artist herself. I had blundered into the space as they were getting it ready for the official opening (which I think means it was closed while I was there), and the artist came over to see if I was from the press. Even when I wasn't she gave me her card (if I had it with me here, that would be helpful as I have forgotten her name), so I asked her about the technqiue - lacquer. This is a big thing in Vietnam, which I would have learnt had I seen the rest of the gallery before I saw this work. Here is another, older, work of Hai Phong Harbour 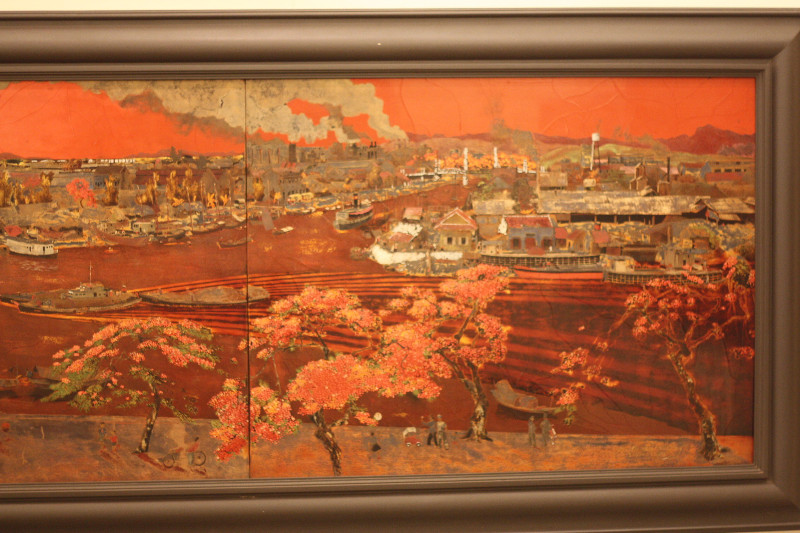 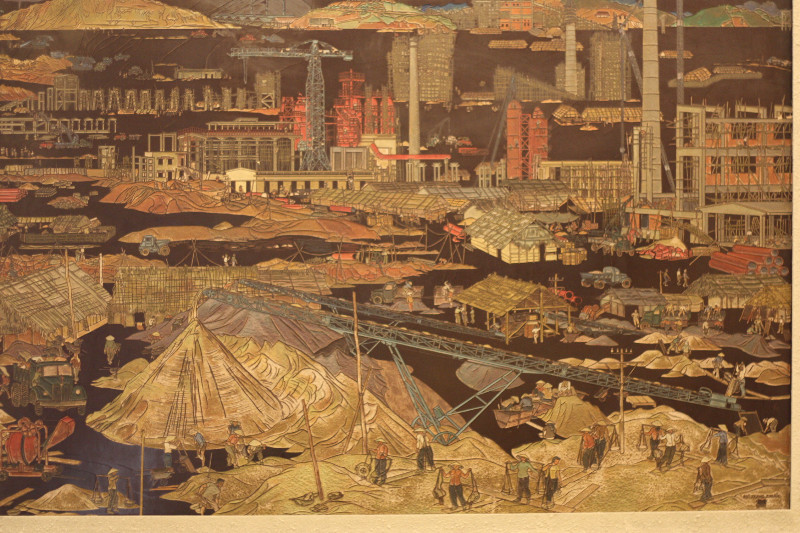 These just amused me 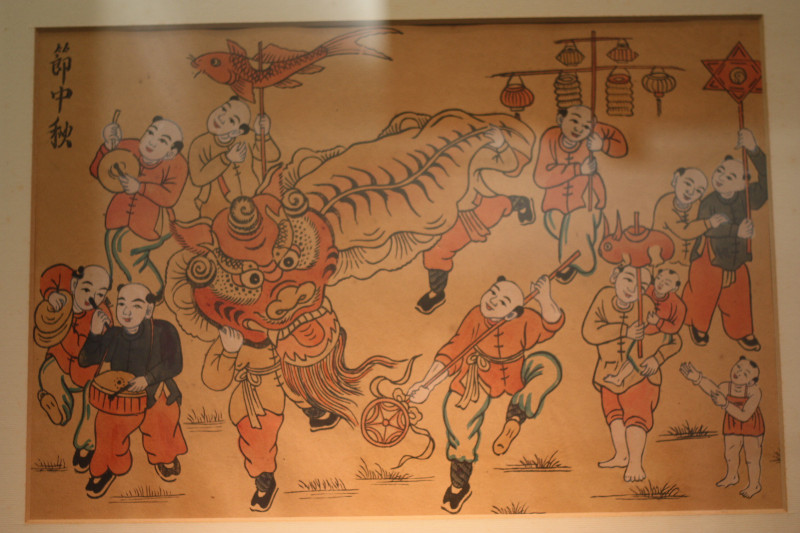 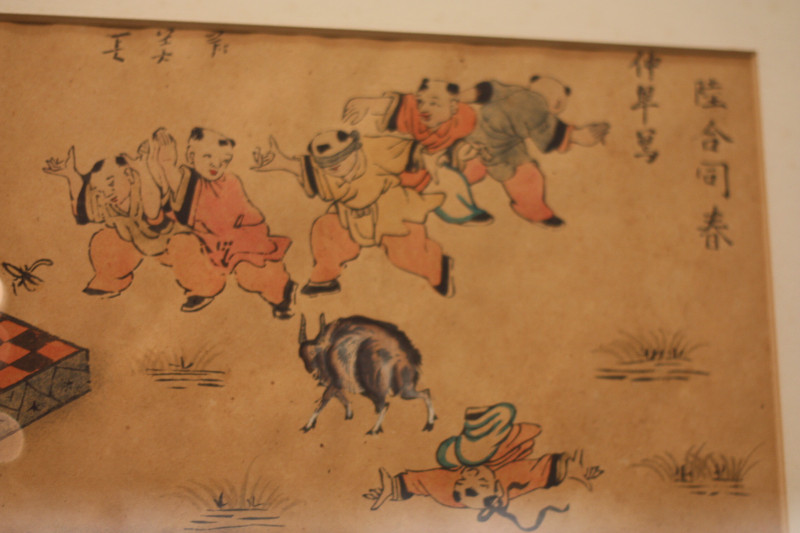 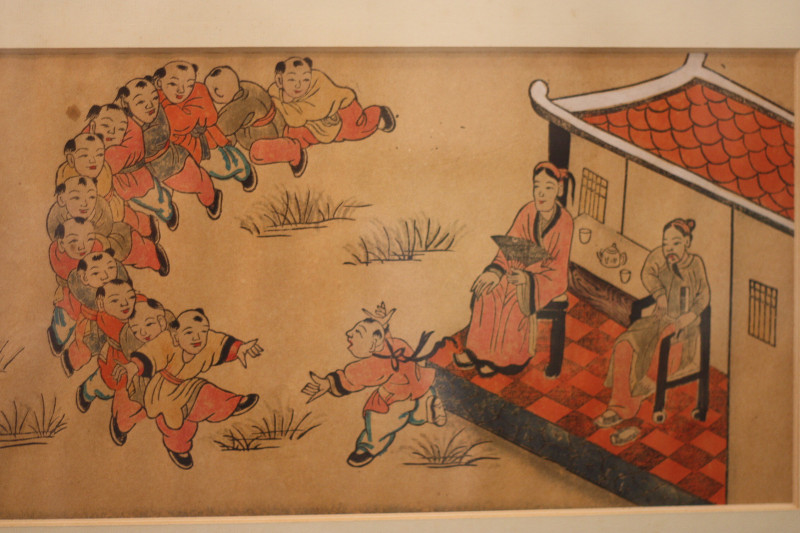 and this one was vaguely intimidating: 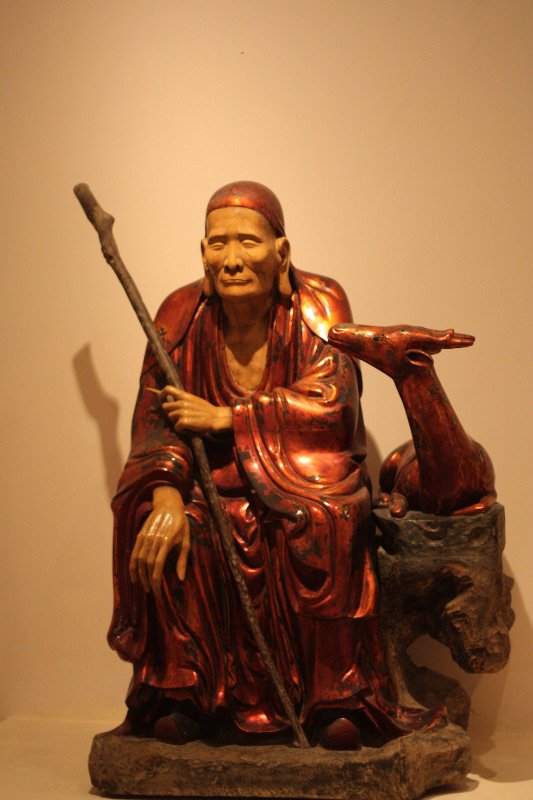 Early on Boxing Day, I was off to Noi Bai airport where I caught a Vietjet (totally innocuous) flight to Bangkok. Apart from a brief stopover between trains, I haven't been here since the late 1980's: it was the very first place that was not New ZealandI ever went to. My visit then was cut short by my need to flee (got caught up in something very dodgy, something that felt dangerous) so I had decided to spend a week exploring Bangkok. I had another reason: there was a particular hotel I wanted to stay in, not because it was flash, not because it was particularly charming but because it was an anachronism. Most people I am sure will be aware that Bangkok has a reputation for, shall we say, being a fairly easygoing sort of place, with Nana Plaza being one of the two most easygoing spots. My hotel was a mere block away, but it had a morals code, literally: long lists of do nots were posted on the wall (including "no catamites, junkies and degenerates") with the suggestion that if people did not like them - the rules I mean, not catamites, junkies and degenerates - they could go somewhere else. The poster went on to say that the staff may well be "sweet and ineffectual" so it might be up to guests to police the rules but reassured us that if we were not up to the task, people would be procured who could.

The hotel was originally a chemical factory, but in the 1950's its German owner turned it into a R&R resort (it had the first hotel swimming pool in Bangkok) 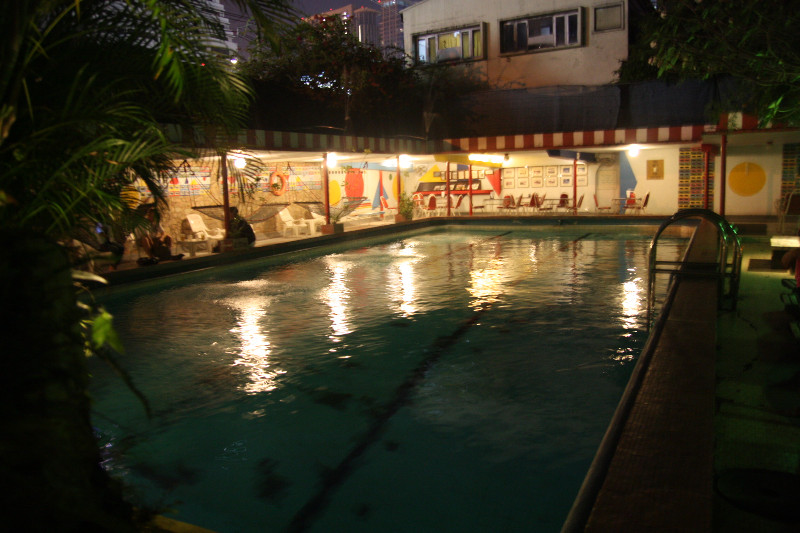 for American soldiers. The owner died, the place went to the dogs and then in the 1980's the fellow who had inherited it visited and was shocked at what he found - hence the morals code. The outside was nothing special, the rooms were basic but its public spaces are a bit of a time warp. Here are the front and rear entrances 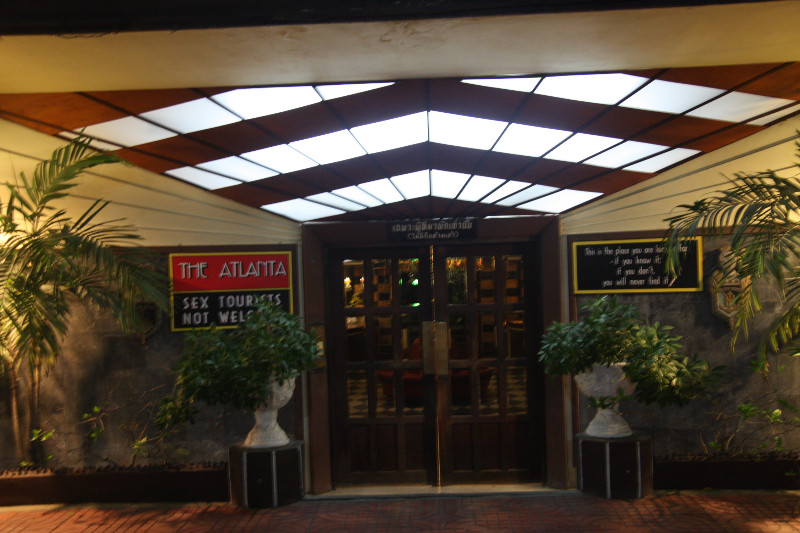 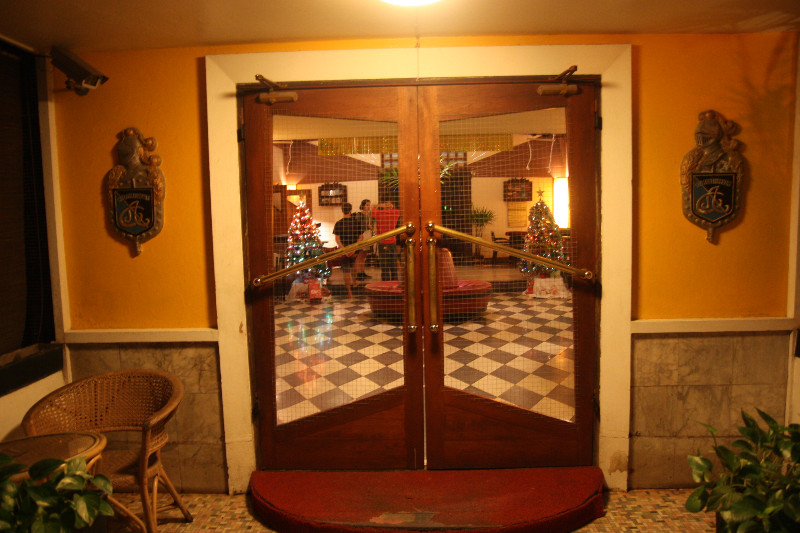 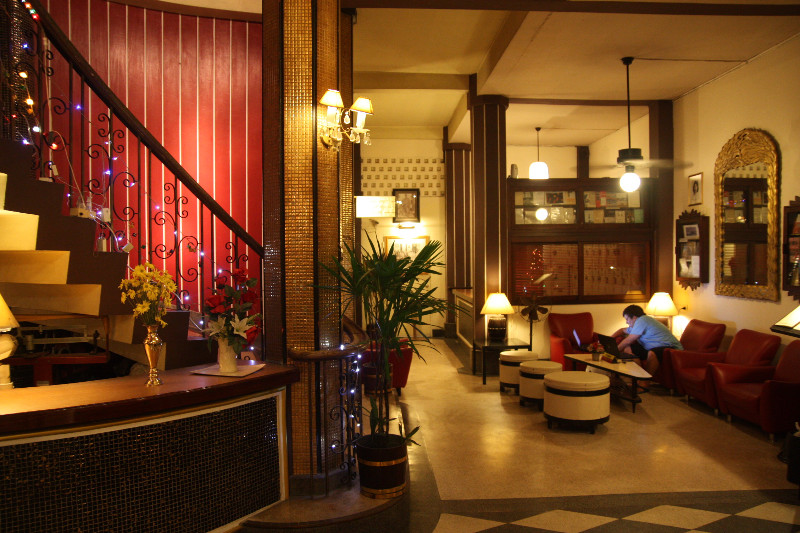 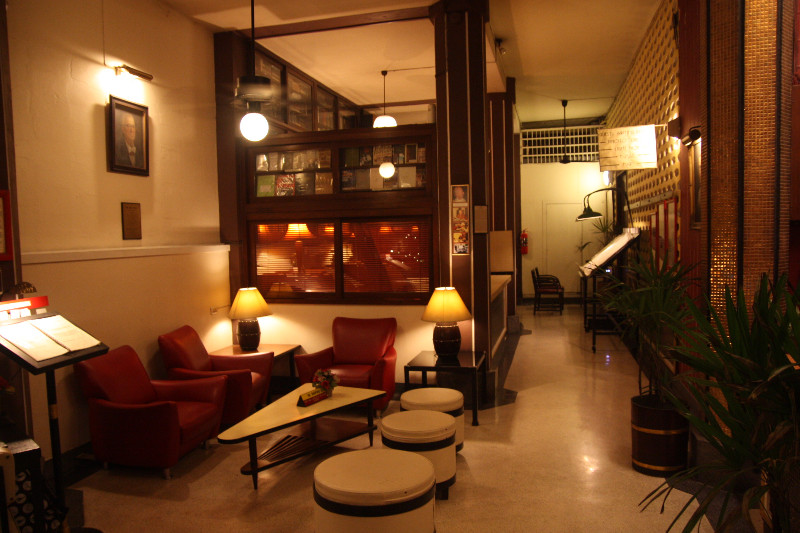 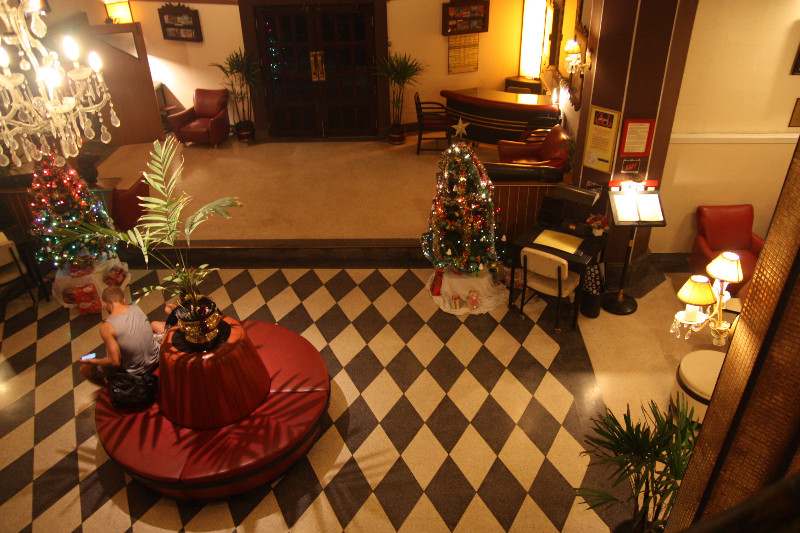 I spent quite a lot of time in the dining room - I'd come home at the end of a day and relax here with a nice cold one, and use the internet. I had a couple of meals and snacks - I had thought that it was the sort of hotel that people would gather here and get to know each other a bit, but no. Maybe it had something to do with the staff - here is how one fellow describes them on tripadvisor: "However the staff are certainly quite stern, and any smiles in the restaurant seemed fleeting and strained, so it didn't feel that relaxed a place to eat for a solo diner." 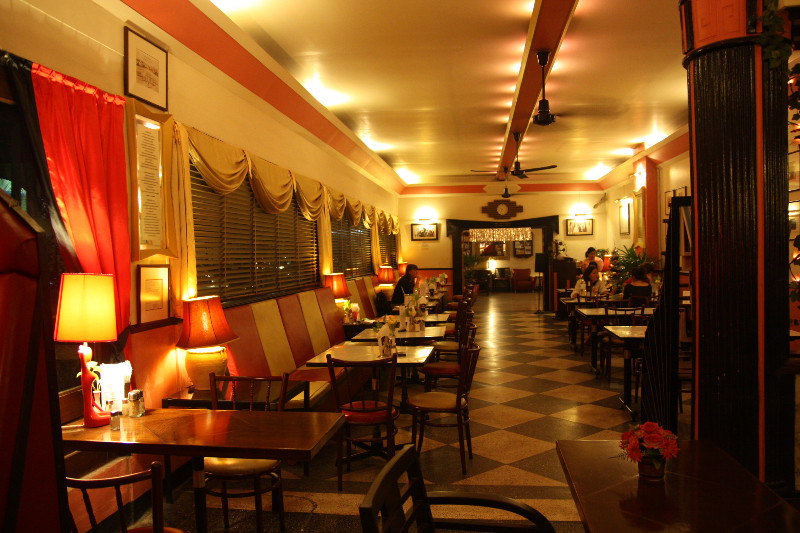 I spent my first morning in here making a long list of the things I would do during my week, and I did start off quite assiduously (I have a couple of posts for those things) but as the week went on, I moved more from an active sight-seeing mode into the hanging out not doing very much mode. But even on my first voyage to do something on my list, I went past this place 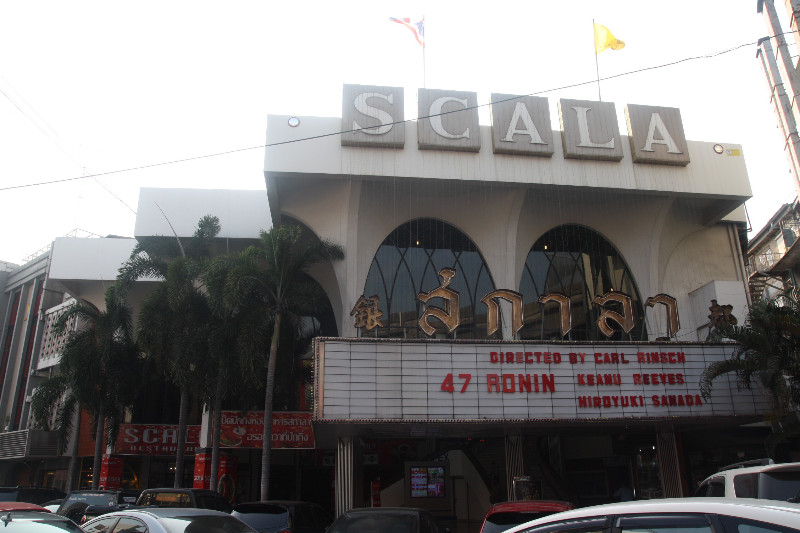 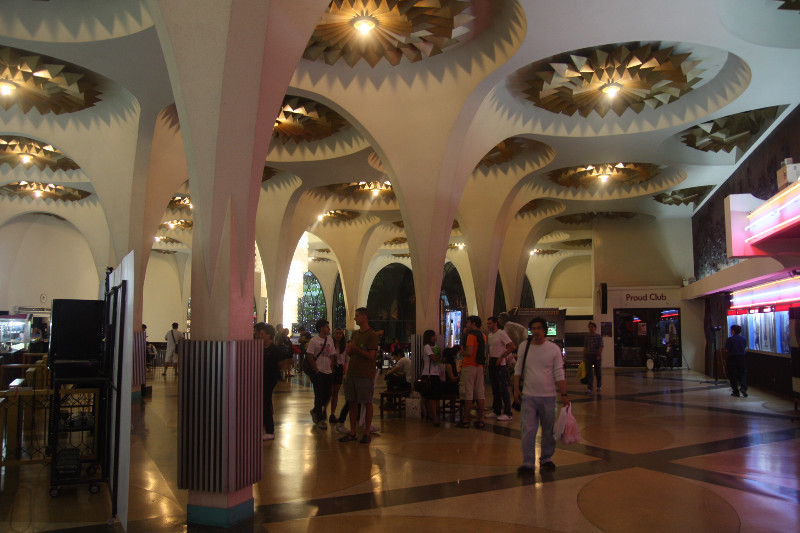 and couldn't resist - the Scala is another piece of Bangkok history. 47 Ronin, by the way, would have to be the most ridiculous movie I have ever seen. It takes an actual Japanese historical event (Ronin are former Samurai, stripped of that honour), but brought in supernatural elements and, even worse, had a battle for control of Japan between north and south depend upon Keanu Reeves. I saw a much better movie at another cinema - I should have taken a photo. It had been a multi-story multiplex, but had not prospered so the building was largely abandoned - there was a go-kart track in the car park and a very nice arthouse cinema on an upper floor, simply called House. The movie was called "Mary is Happy, Mary is Happy" - based on a true story, a story told in 410 tweets. Mary was dropped by her parents into a boarding school and has no contact with them while she is there - the story is essentially of her adjustment, her being a teenager, the friendships she develops, the weird way that teachers have and a crush she has on a particular boy. I enjoyed it so much more than 47 Ronin.