My last post was prompted by my visit to the Museum of Modern Art in Tbilisi, which actually features the work of just one man, Zurab Tsereteli. I sat transfixed, watching the video of some huge sculpture under construction which googling revealed to actually be in Tbilisi. I also found out a bit more about Mr Tsereteli - particularly his wont for grand gestures. He became a great fan of Christopher Columbus and, wanting to mark the 500th anniversary of Columbus's first voyage, decided to make a sculpture of the man. Not just any sculpture, it is a 110 metre high monster weighing 600 tonnes: too big, ugly, expensive and basically OTT for the various American cities to whom he offered it (it was the biggest statue in the Western Hemisphere). It became known as "Chris Kong" and "From Russia with Ugh". One reason I saw for it not being acceptable to the American authorities was that it is bigger than the Statue of Liberty, which will not do. Apparently, back in 1997 one Donald Trump was all for it but his views did not prevail. Although Tsereteli ultimately managed to convince Puerto Rico to take it on, the statue lay in pieces for 20 years before finally being put up in 2014 (at a cost of around $100 million) where it is called "Birth of a New World". The insensitivity of mounting a monument to a coloniser on an island where he practically wiped out the population has not gone unnoticed, but that did not trouble Tsereteli.

He also has a Peter the Great statue in Moscow that people hate so much they want to blow it up (and apparently Peter hated Moscow). Some have actually said this was just another Christopher Columbus statue for which Tsereteli could not find a taker so he changed its head and talked to his old mate, the Mayor of Moscow.

So learning all this, of course I had to go see his donation to Tbilisi - which he called Chronicles of Georgia - the basic idea is to present the Kings, Queens and other important leaders of Georgia in the last thousand years or so. Construction started in 1985 but it is still not finished and may never be. A few people have visited and mentioned that the locals don't seem to know much about it or go there and that it is difficult to get to. I actually found it quite easy - go to near the north end of the metro line and then catch a #60 bus to the so-called Tbilisi sea (which is a lake, and not a very big one). 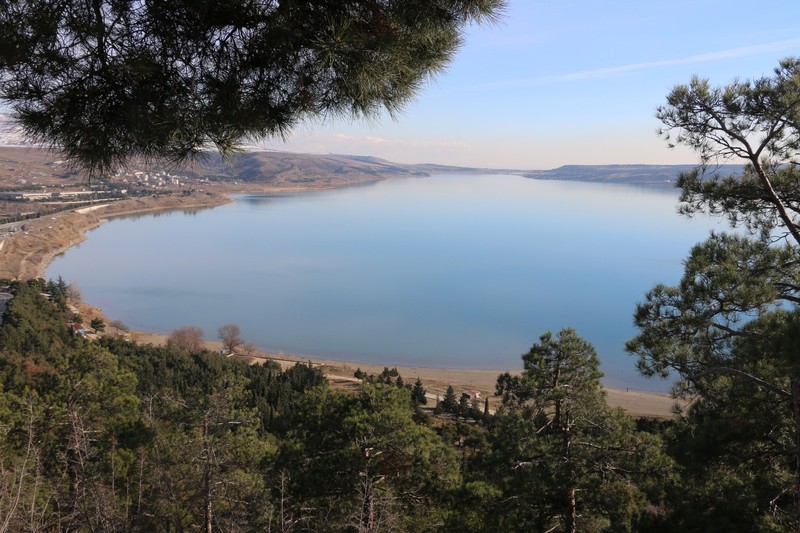 This is what I see as I approach on the bus: 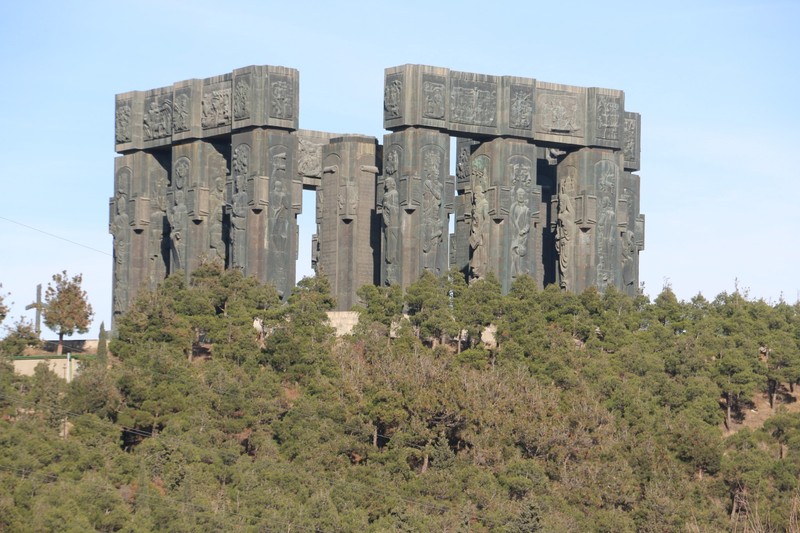 You ascend some steps 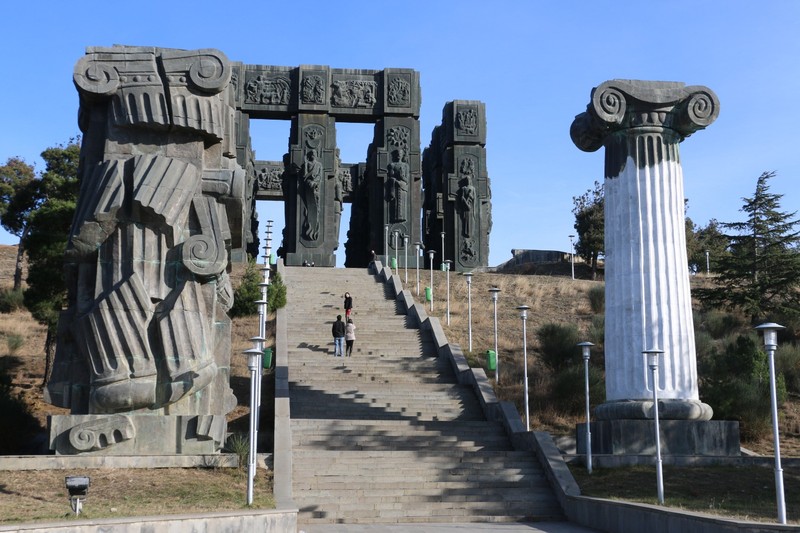 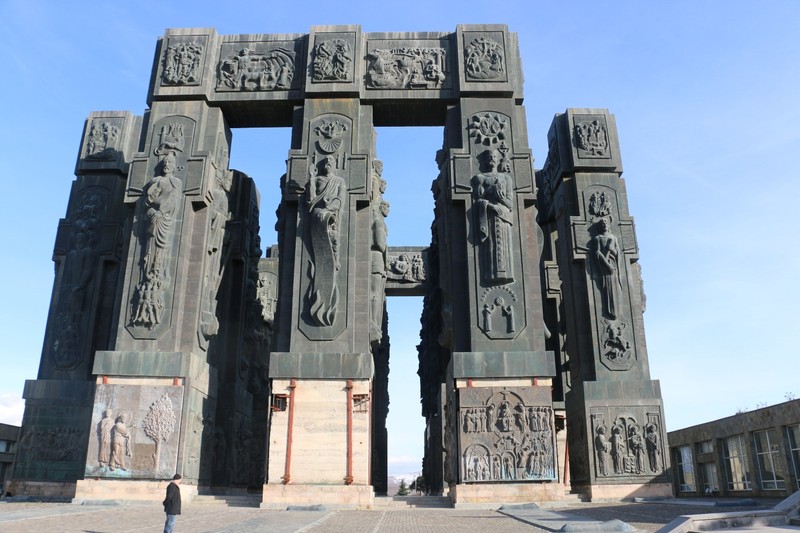 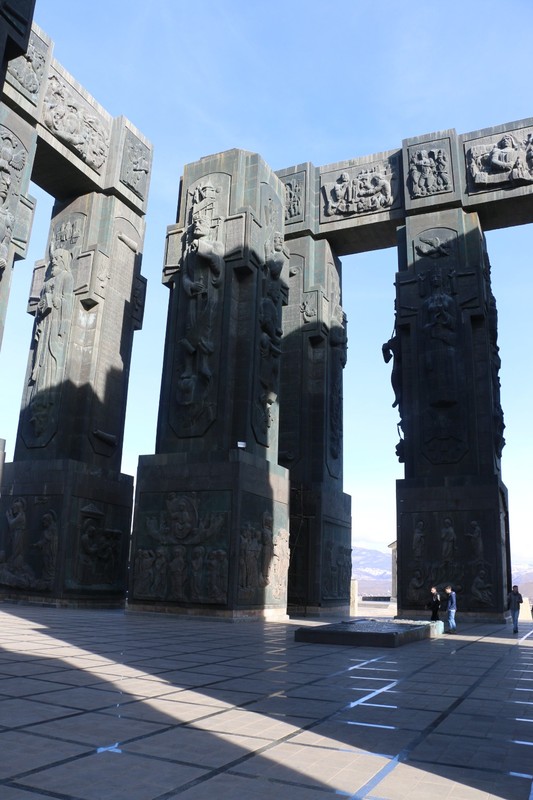 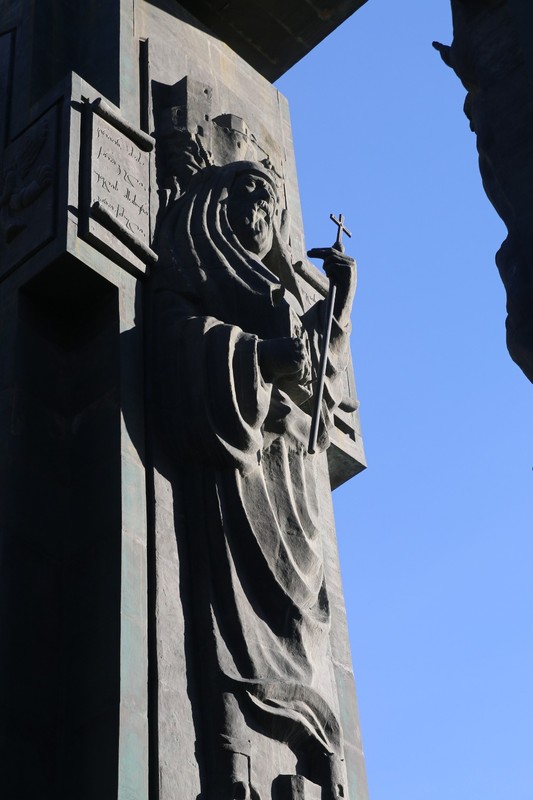 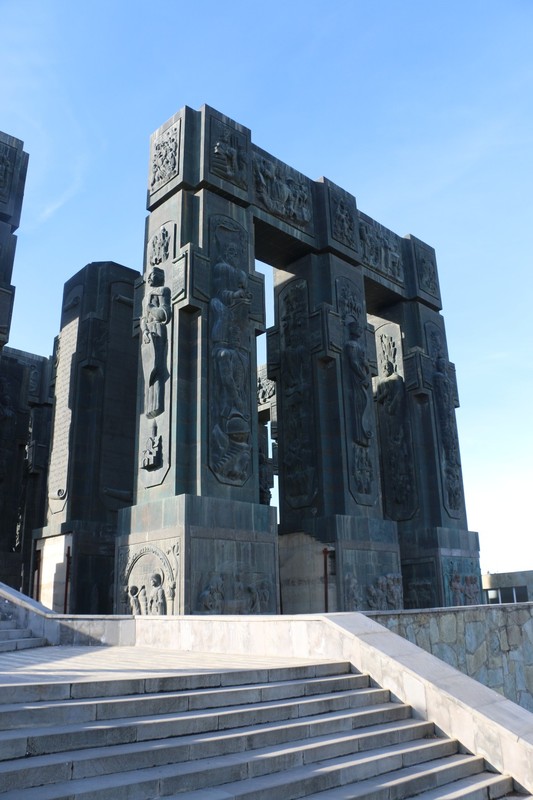 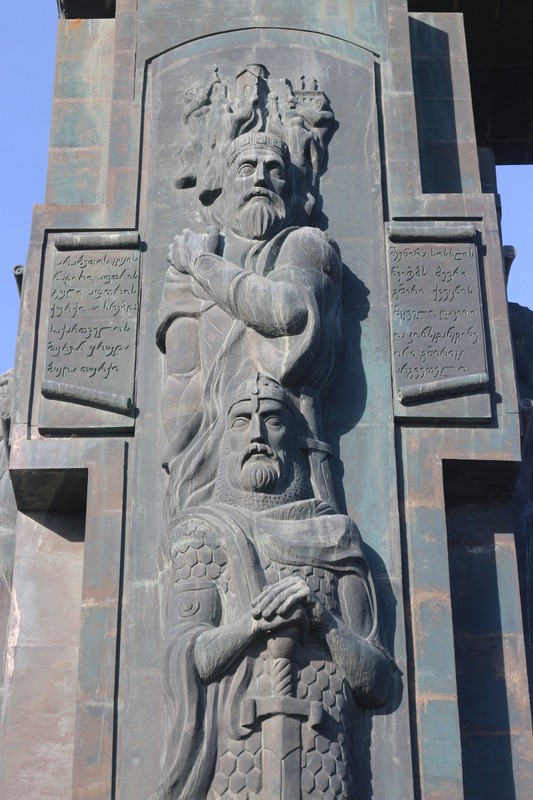 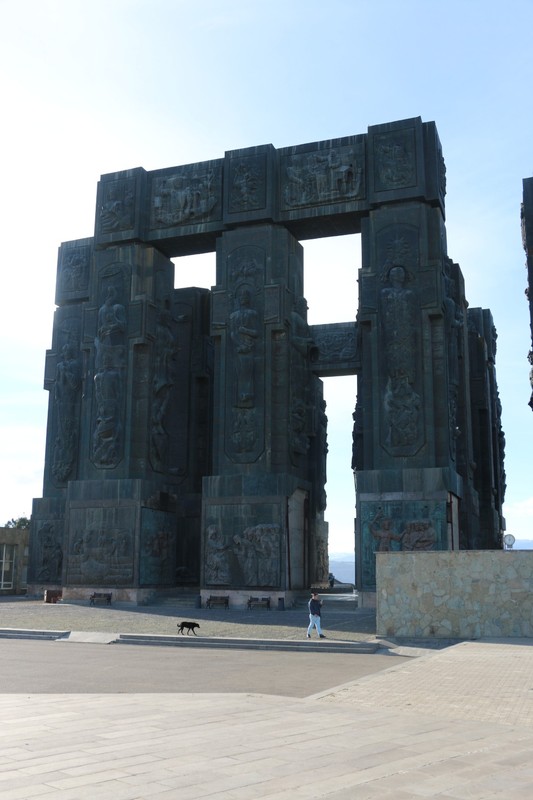 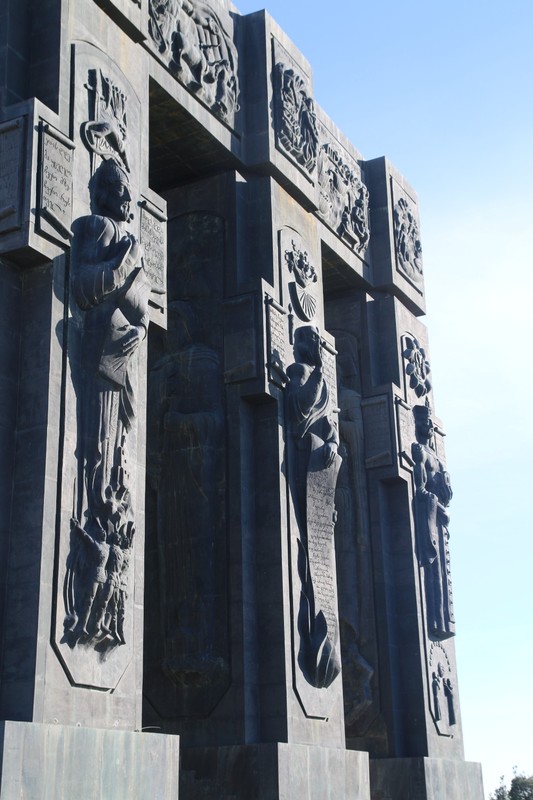 There are two levels to this chronicle - the lower one tells the life of Jesus - I am not sure if this means he is of lesser importance to Tsereteli than the Georgians or whether they are standing on the shoulders of a giant. 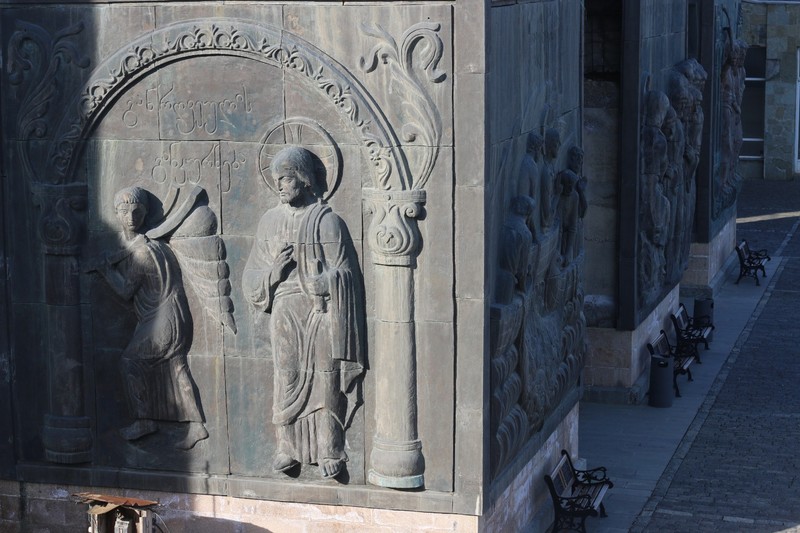 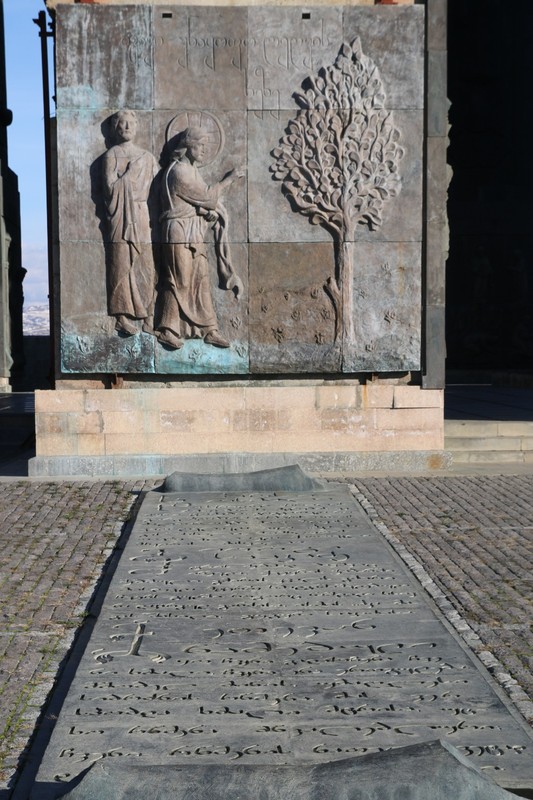 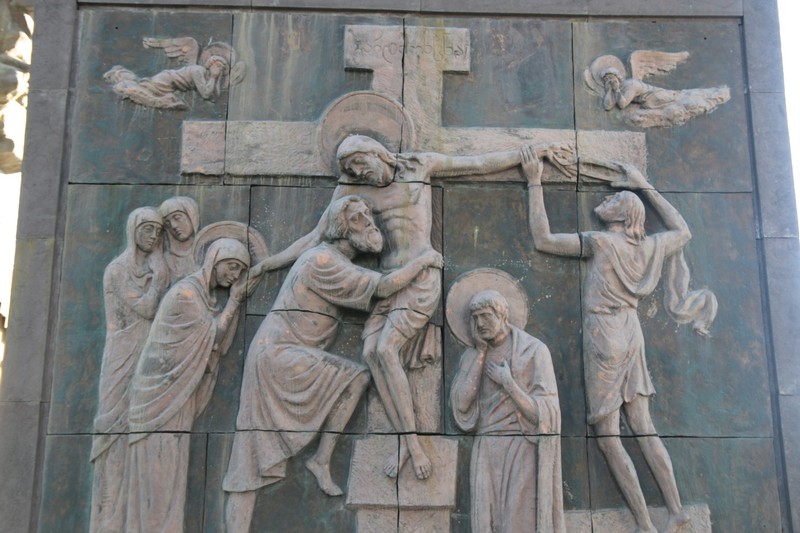 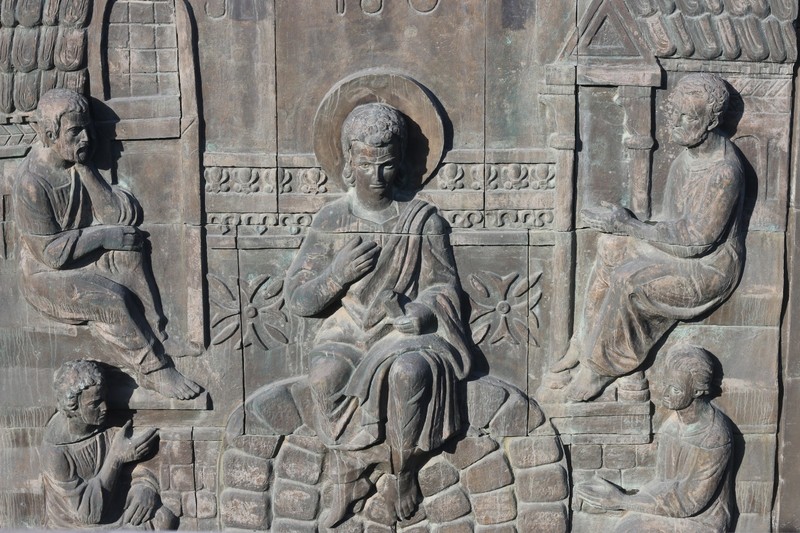 There's a cute wee church on the grounds, with a view over the northern perimeter of Tbilisi. 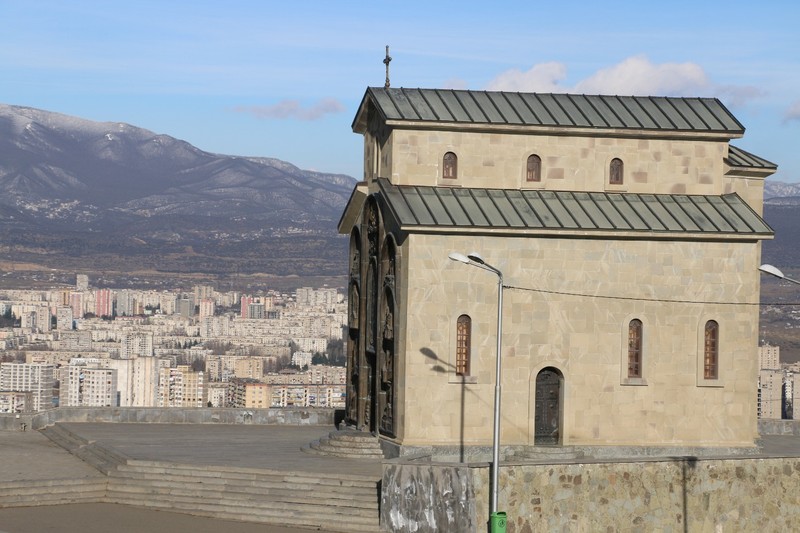 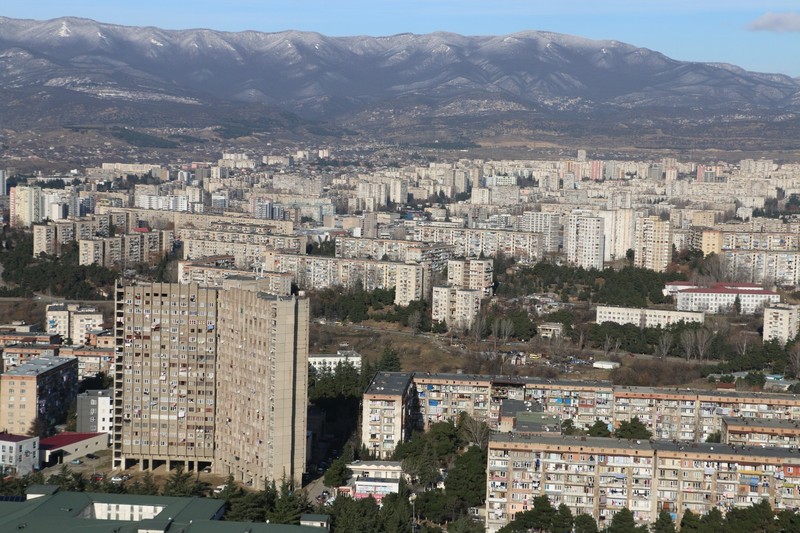 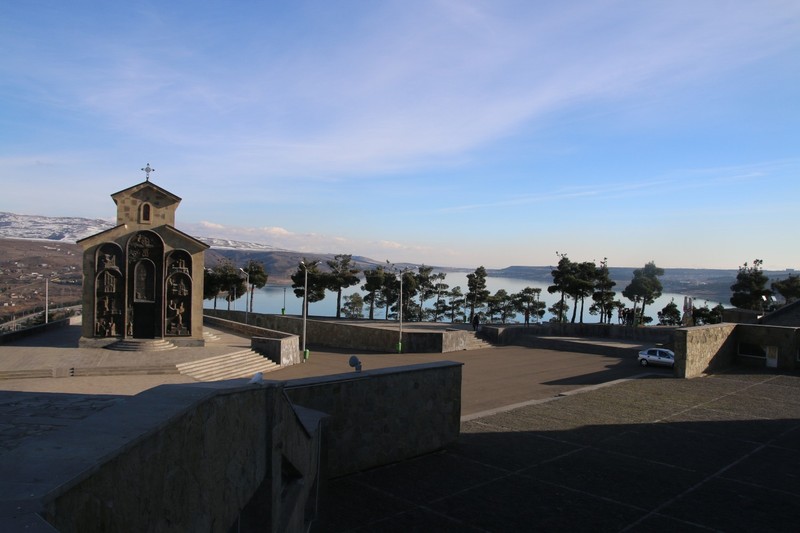 I stay for more than a couple of hours, quite overwhelmed by the scale of the project: I have no idea who any of the people are, and there are no signs to given any information. There is a bloke hanging around claiming to be a guide but he seems a bit suspect to me, so I leave him to it. There are not many visitors but there's never not another three or four groups there (and it is the middle of winter).