Going to Prague was a bit like going to the fourth floor of an art gallery. You know all the exhibits are wonderful, possibly better than all that has gone before, but you’re suffering a bit from enjoyment overload, starting to look for things to be truly spectacular before you unleash the camera. When the whole central city qualifies as spectacular (thanks to never having been hit by war), then you try to shoot everything or shoot nothing. I did the latter - I think these are the only random building photos I took, on my way to an English language bookshop and cafe: 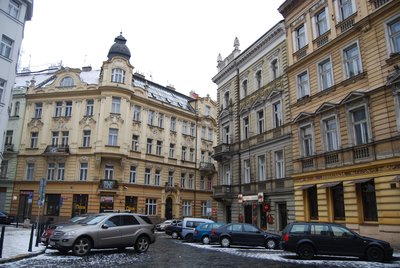 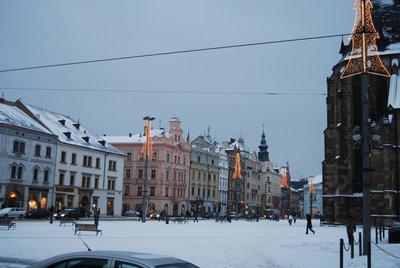 Mind you, I wasn’t feeling very well. I got in on Saturday night, about seven, had some dinner and started to feel odd; very jittery, very cold (and Prague was comparatively warm, at about -1), coughing a lot and then, when I went in, sort of cold but on fire at the same time. So I did decide to take it easy. It was only when I got a bit of a pep talk from back home (thanks Shauna) at around lunch time on the Sunday that I gathered up the energy to go outside. I had no appetite, except for these great sausages they sell in wee cabins down King Wenceslas Square 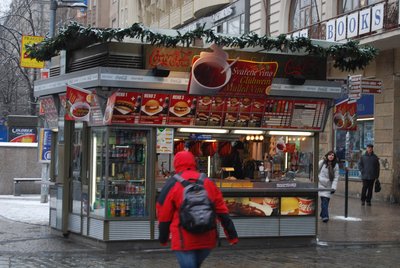 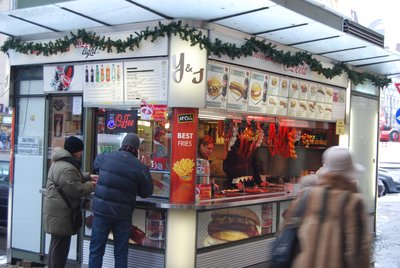 I love that you can not only buy beer but Bohemian Sparkling Wine in little bottles, to enjoy with your sausage on a leaner on the snow-covered footpath.

I did force down a piece of chocolate cake, sorry a LARGE chocolate cake, as the waiter insisted, really a mousse. I thought I should buy something, as I was in the same café as formerly occupied by Franz Kafka for many years and also by Albert Einstein when he taught in Prague. It must have been quite a place; during the war, those who spent their time gas-bagging/engaging in deep political debate became so unpopular (with whom, I’m not sure) that all of the “appointments” were thrown out the windows – without, I suspect, anyone first taking the trouble to open the windows – and the place was trashed. So badly that it was not opened again until the 1990’s – you wouldn’t know it, as they’ve done a fine job of restoration. 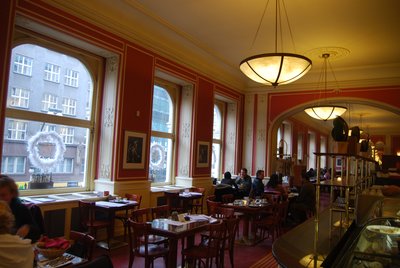 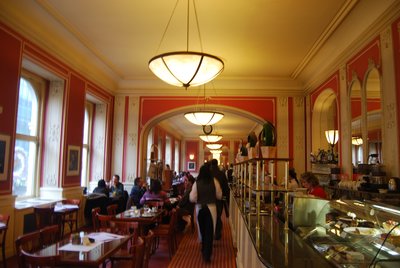 I did wander around a bit, but not across the river to look at the castle, or into any of the sights (I did consider going to a classical music show) because the building looked fantastic, and they seemed to organise something different every day: 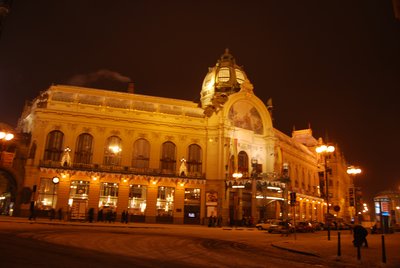 But I don’t think Prague liked ME very much, to be honest. Within an hour of me being there, after I’d eaten my cheap and nourishing meal of potatoes and chicken legs and taken a couple of pints of the local beer, I was window shopping in the Palladium mall when these two guys appeared from nowhere, security as it happens, and seemed to want me to leave. I wasn’t doing anything, just peering in windows, so it must simply have been on the basis I did not seem quite posh enough for their premises. Just as they were about to grasp me, I had the presence of mind to ask if they spoke English, which caused them to go into a mini-conference and wander off. Further evidence that Prague didn't like me? It tried to kill me! It has these lovely wee marble cobbles, I'm sure they look fantastic in the summer. But smear a thin layer of snow over them and have hundreds of people trek over them - they become as slippery as something very slippery.

Prague is just a wee bit tacky, however, with more than its share of dodgy souvenir shops, restaurants which put on a big show of authenticity but have no locals in them, just tourists, and the fact that you are never more than 100 metres from a McDonalds. In fact, my strongest impression about the place was how so many brands foreign to the Czech Republic had gathered in Prague.

On the Monday I was feeling a little stronger, so hopped on a local train out to Plzen, about two hours away. As an industrial town known only for being the place where Pilsener 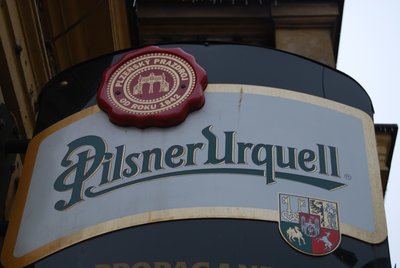 and Skodas come from, I didn’t expect much. But the downtown area is very pleasant, many handsome buildings and more than a few grand ones. I decided it was time I ate something, as it was dark and the sausage from the previous night had probably provided all the energy it was going to. After peering in various windows, I found a very nice looking place in which locals had congregated, elevated above a small park in which a couple of kids were sledding. According the menu, this was the original Pilsner-Urquell restaurant – it was done out with old brewing memorabilia and photos of the brewery. Of course, it might have just been like a Speights Ale House, one of many. Beer was fantastic, but the food was pretty average.

Just to give some indication of how tropical Prague was: 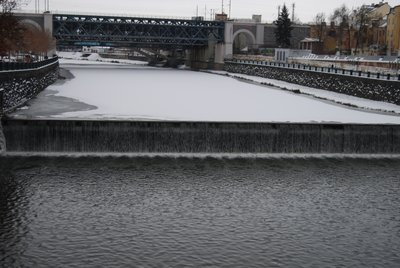