Decided to get back to Athens the easy way and just bus it the whole way. Got dumped in a bus station in some random part of town. I did ask for (and get) information on how to get to the nearest Metro stop, so took a local bus. Should have asked for advice on how to recognise a Metro stop! I couldn't work out where I'd started, where I was headed or what any of the signs meant (the thought did cross my mind, sorry, that "its all Greek to me"). I can't really explain why, but I just got off the bus only to then see the Hostelling International symbol on the building opposite. My pathetically relieved response? "Ah, they'll be able to tell me where my hostel is." Damn me if I didn't accidentally get off at the actual hostel I was booked in to. 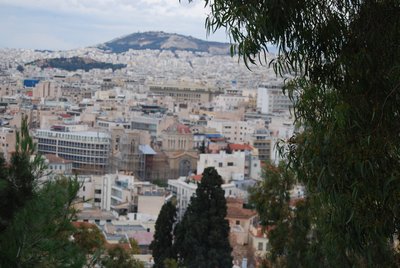 I wandered around my area a little, finding the train station (round the corner from the hostel, so I should have just caught the train) only to be laughed at when I asked for a ticket to Thessaloniki (my whole plan of getting to Hamburg by train kind of depended on this, but they were booked solid till after Christmas). I took a walk further afeild, down the main drag past Parliament, into a pedestrianised shopping street with all the flash brands (and very pale people wearing elaborate American Indian costumes perfroming in bands, about four of them - very strange). Billions of people milling about and no sign of food, unless you count McDonalds or Everest, its local equivalent. Lots of cafes, but with people just drinking coffee, smoking and talking very vigourously to each other; no food.

Wandering back through Omonia Square, I decided to try out a place just because it had a couple of nice looking roast chickens in the window. It was pretty much just another fast food joint but with the added bonus of beer and the saddest drug dealer I've ever seen. He came in with a kid, hissing "hasheesh". No takers, as far as I could see. The two cops sitting in the back may have dampened demand. Ten minutes later, he's back, to beg; money from us, food from the shop. He was surprisingly successful on both counts, scarpering with a rather large bag of kebabs and the like.

It was still early, but I didn't really fancy any more of Athens so retired to my hostel.

Things improved remarkably the next day. I wandered up a different street and found a rather nice bakery with a good cafe in back; full of Greeks talking vigourously to each other and smoking, but with free croissants and decent coffee. This was a "Greek History" day for me, so I followed my guidebook fairly faithfully, starting with what is left of Zeus's Sanctuary: 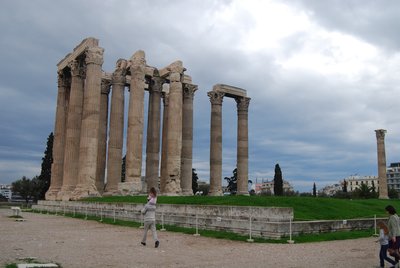 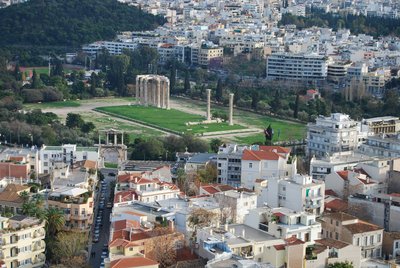 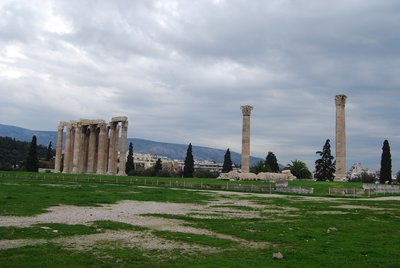 In the same area, there is Hadrian's Arch (posibly built around 131 AD to honour Hadrian as the new Roman Emperor of Greece): 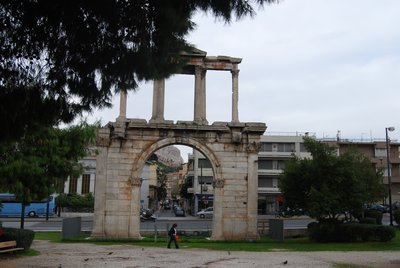 I liked the look of his library better (and the fact that they have this great antique building right in the middle of downtown Athens, next to a Metro station): 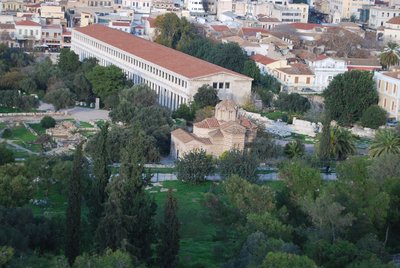 Next up was the Acropolis. My guidebook insisted that I follow a wee path, about one person wide, up between some tiny whitewashed houses, built by and for the stonemasons working on the Acropolis. It was a very nice walk, but the houses tended to be hidden away from view so I failed to get any decent photos. My guidebook told me I'd find a road to the Acropolis at the end of the path, but failed to say which way to go. I also ran into a couple of guys wearing leather coats and faces like those of President Putin's bodygiards who were equally bewildered, and Rebekah, a final year Biology student from Germany. For some strange reason, she decided to join forces with me, so we struck out up the hill - a logical way to go to a city in the sky, yes? Apparently not as we hit a dead end; you have to go down to go up, it seems.

On the way we saw lots of bits and pieces of marble and other building materails - at times we were left to wonder if we were looking at a ruin or a building yard, but were left in no doubt with the Odeon of Herodes Atticus: 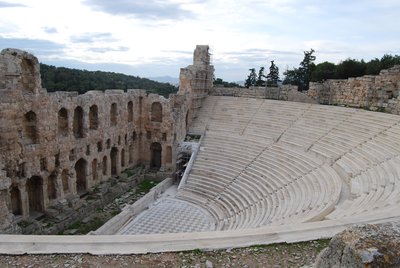 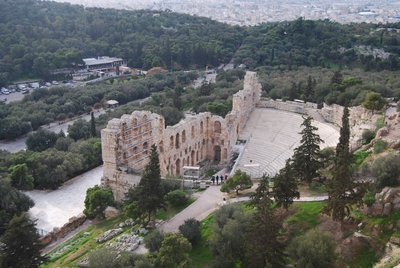 In fact, we had a bit of an argument over whether the seats might have had restoration work done to them; I couldn't believe they'd look so good (the thing was built in 160 AD, by Atticus to commemorate his wife) but Rebecca insisted that "marble keeps well". Maybe Dionysus just used crap materials when he had his theatre made in 500 BC: 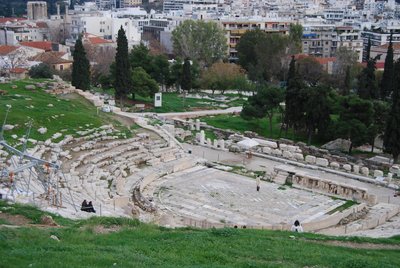 The site was a lot smaller than I imagined - I still don't know if it is where everyone lived back when it was built, but it is only about 3 hectares. The thing that amazed me was all the work involved, in getting verything up on top of a sizable hill to build the fortifications and all the buildings. Its a shame that only the Parthenon really survives: 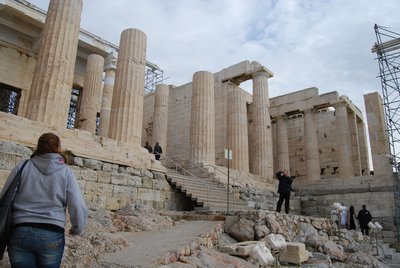 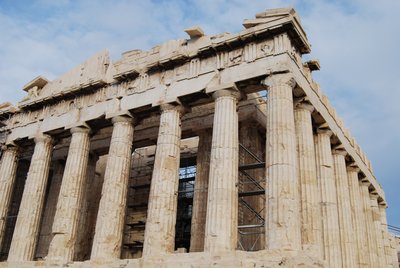 and it is in bad shape, although under restoration. This provoked another argument: Rebecca is sure it will take centuries to do; I think it will be done in her life time. After all, it didn't actually take centuries to build - I think Pericles pretty much got the job done while he was in charge of Attica. Small data point: the guys who had control before Perciles had their own building project under way - they managed to bring 8000 2 tonne blocks of stone from Pireaus (maybe 50 k away) and get it to the top of the hill! That's teamwork.

We wandered down a different way, only for me to find a long strip oif restaurants down one street, and another strip down another and me being heartily laughed at for not being able to find a restaurant in Athens. So to punish her for laughing at me, I made Rebecca have dinner with me - it was nice to have company. 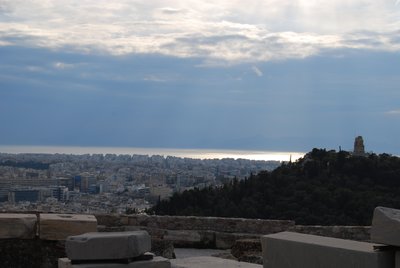 So, yeah, I left Singapore; now the travel starts for real.

Entry into Greece was a breeze. I’d panicked a bit, as immigration people can get a bit funny if your onwards plans aren’t complete and I still had the sector home from the USA to work out. Plus, my passport is going to expire less than six months before the end of the trip, so I thought I should get something right and invested in the trip home. As it happens, the Greek immigration fellow didn’t even say hello (a characteristic I have quickly found to be common here) let alone ask any questions.

With a 7:00 a.m. arrival in Athens, I didn’t quite know what to do; I couldn’t really check in to somewhere and sleep and spending a long day sight-seeing after a long flight didn’t really appeal. So I looked around for possibilities; the Peloponesse area looked inviting, but where? Movenvasia is a town on an immense rock, just off the coast but it would mean all day on a bus. Náfplion is much closer,

and a place lots of Athenians go for their weekend break; perfect. I know all the train services south were disrupted, but my (old) guidebook indicated that Corinth offered a seamless transition from train to bus, and I could get their directly from the airport. Hah! In Corinth, they’ve moved the train and bus stations, in opposite directions. So, I spent an hour at a Corinth bus stop before I could get a transfer out to the bus station, where I spent a couple of hours surrounded by the Greek army (soldiers dispersing for their holidays, I decided).

The bus trip down was OK actually; the road was narrow and windy, with lots of hills. We had to thread our way through Argos and its tiny streets not designed for buses; I began to hope that Napflio was spectacular, as Argos looked pretty good, somewhere I’d like to explore for a while (my guidebook tells me it is the oldest continuously occupied place in Greece, 6000 years old).

Luckily, Nafplio is even better; it is built on the waterfront, with a bunch of grand hotels and cafes. Out in front is a floating fort. 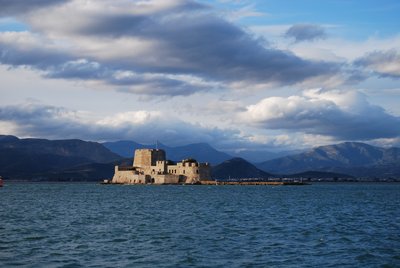 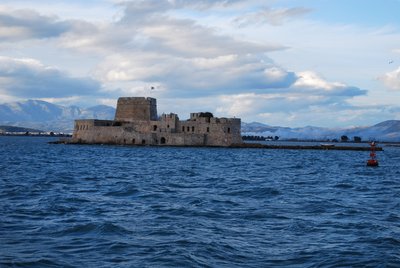 Behind is the old town; beautifully restored, with fancy shops, cafes, hotels, tavernas. 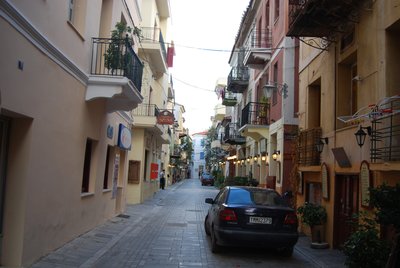 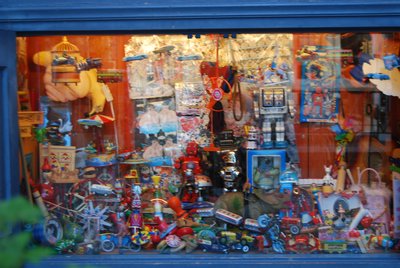 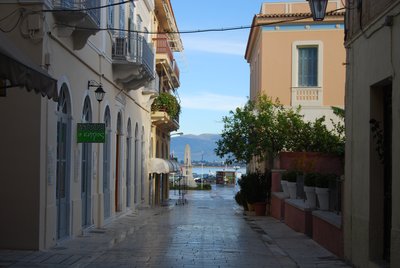 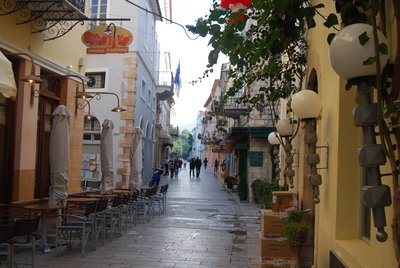 I didn’t quite know where the hotel I had booked was in relation to all this; right in the middle of things, as it happens, this is from my balcony: 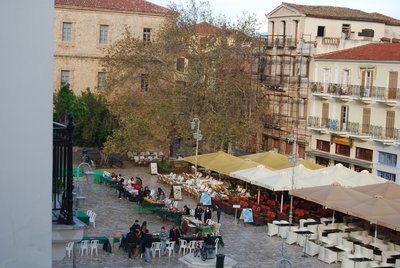 Not that there was a lot happening; being the middle of winter (so the standard temperature is about what we might expect in New Zealand in summer) virtually all the restaurants and cafes were empty. There were a few smart bars where I'd find a few people, not really drinking but having a coffee and eating cake and smoking furiously. [There appear to be no restrictions on smoking at all here; when I was getting off the plain, I noticed a smoking area in the airport, created simply by putting up a sign in the main thoroughfare and providing some ashtrays.]

Then, as you move away from the water, things get a little less fancy. Lots of old school butcher shops and corner stores, along with street facing offices in which people were still doing obscure things after dark on a Friday night and the occasional taverna; these ones tended to be populated by small groups of old men. I went in to a shop to get onto the internet. After I'd given my credit card details a couple of times, I discovered it was not an internet cafe at all; it was some sort of online gambling place - luckily for me, I won a billion Euro before I found out.

Behind and above it all is a splendid church, 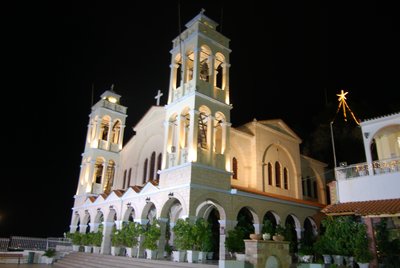 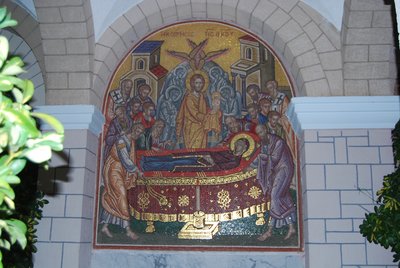 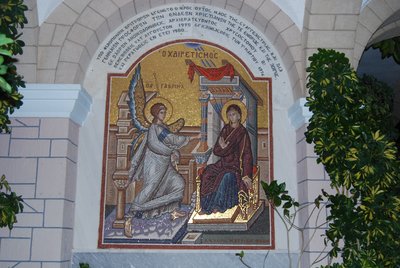 Looking down these steps, which were at the top of a hill already, it struck me that the people attending this church must REALLY want to go to church!! 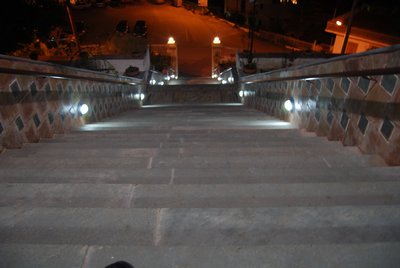 Above that is the old fort: 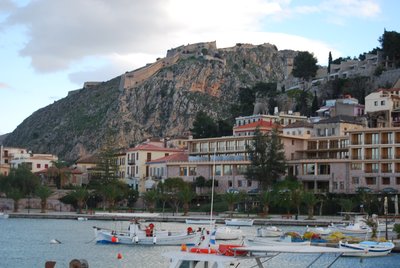 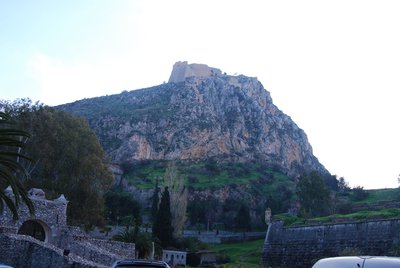 I could not work how to get up to it, the gondola was closed for the winter, I could see paths near the top but nothing else. It was only when I caught the bus to leave that I actually found the beginning of the path up the hill. Ah well, I was happy with the bits I did see - there were fortifications from one of the wings of the fort I could get to.

I was a bit worried about dinner; dozens of restaurants and no-one in them looked a bit weird. I was rescued from my dilemma; a fellow from the restaurant behind my hotel accosted me as I walked past and was friendly so I went in (to be the sole occupant). They prodiced the exact soup I’ve been dreaming of for a long time but never quite been able to find nor get a recipe for – it is a spicy bean soup: 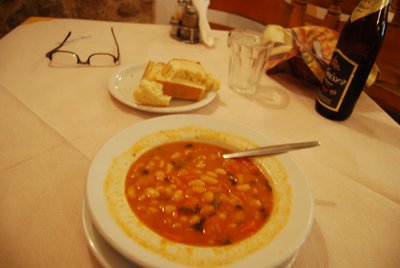 After such a healthy entrée, I didn’t mind that I pigged out on a mountain of lamb chops and chips.

As I was wandering around on the Saturday morning, I saw lots of people dressed up as Santa or his helper 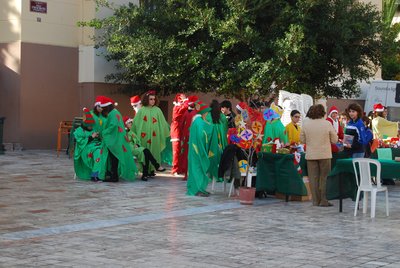 Maybe it is just a local tradition to dress like tha; maybe they were going to put on a show. I have no idea!!